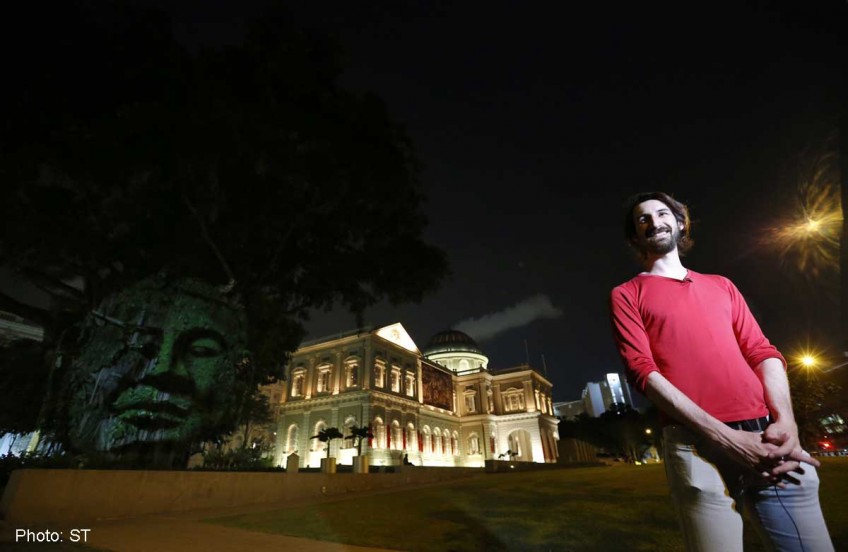 In Divine Trees, French artist-photographer Clement Briend will project images of Asian deities onto trees at the National Museum during the Singapore Night Festival next month.

FOLIAGE becomes an unlikely canvas for art in one of the highlights of the upcoming Singapore Night Festival.

French artist-photographer Clement Briend will project images of Asian deities onto the trees outside the National Museum of Singapore, forming beautiful, haunting 3D-like images against the night sky.

"The trees give life and bring meaning to the projections. They move in the wind; they are alive," said the 32-year-old of his work, Divine Trees. He was in town for the press preview yesterday.

The popular festival, to be held for two weekends at the end of next month, will once again see the Bras Basah-Bugis arts and heritage district buzzing with free open-air and indoor installations and performances.

Now in its seventh edition, the festival drew more than 400,000 people last year.

Headlining the festival, which opens on Aug 22, is William Close's Earth Harp, which will turn the National Museum into a larger-than-life "harp" by stretching strings from the museum's front lawn to its roof.

In a first for the festival, this year's event will feature a Festival Village with stalls serving food and drinks at Cathay Green across the road from The Cathay. It will include a flea market, musical performances and film screenings.

The festival will also have a theme for the first time - Bold And Beautiful. Creative director Christie Chua, 35, said: "We are celebrating the boldness in the collaborations between the arts groups, and the beauty of the various art forms."

This year, three arts organisations in Armenian Street will come together to host a raucous Block Party. The Peranakan Museum, The Substation and live music venue Timbre will present roving music acts, a 31-plays-in- one-hour show and even a live wrestling match in a real-life ring.

Ms Chua said this is in keeping with how the festival is able to find synergies among different organisations in the Bras Basah-Bugis area.

Visitors will also be able to see the museums in a different light. For example, they can head to the National Museum's Fashion Gallery to catch a contemporary dance performance by dancers from The Arts Fission Company.

The organisers will release more details of the festival closer to the date.