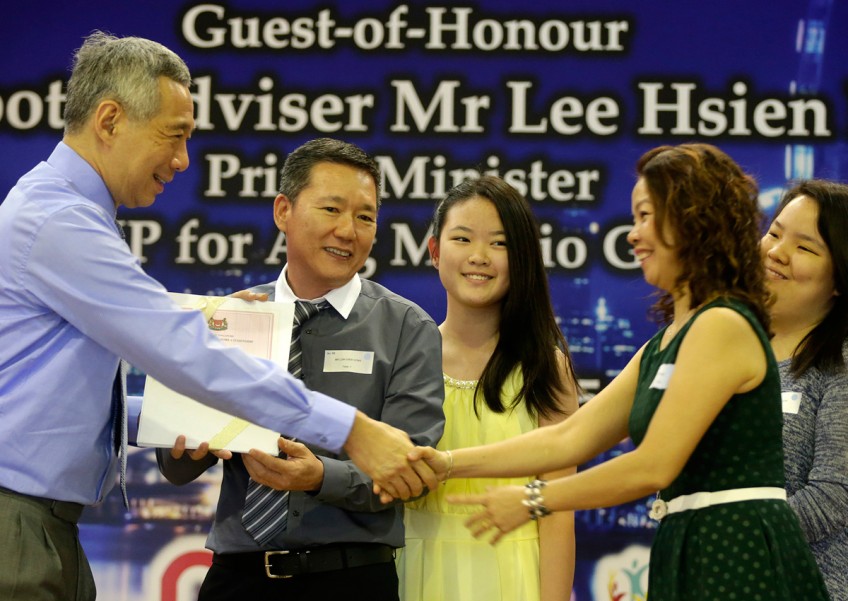 For eighteen years, living and working in Singapore as a foreigner and permanent resident was enough for Madam Ramakrishnan Jayachitra, 42.

But when her son, who is 17, neared his date of enlistment in national service, the programming analyst realised that she wanted to call herself a Singaporean.

"I've given birth to a son of this nation," explained Madam Ramakrishnan, who is originally from Pattukkottai in India's southern Tamil Nadu state. "I should become a Singaporean to get in the spirit of things."

Yesterday, she was one of about 200 Ang Mo Kio GRC and Sengkang West SMC residents to recite the pledge for the first time as new citizens.

Prime Minister Lee Hsien Loong, who is the MP for the area, attended the ceremony at Teck Ghee Community Club and welcomed the new citizens with a quote from one of the Republic's founding fathers, Mr S. Rajaratnam.

"Being a Singaporean is not a matter of ancestry. It is conviction and choice," he said.

Calling new citizens "co-authors of the next chapter of the Singapore story", PM Lee urged them to continue to deepen their roots in the country.

He said he hoped the new citizens decided to make Singapore their home not just for its comfortable and safe environment, but "also because you believe in Singapore and identify with what Singapore stands for".

These values include being a multiracial society, a nation of opportunity, a fair and just society, and a place where tomorrow would always be better than today, he said.

Like the early pioneers who arrived from different lands and came together to build Singapore, Mr Lee said he hoped the new citizens would "feel the compulsion to carry forward what (the pioneers) have built, by constantly striving to always do better, whatever the circumstances."

He highlighted how some new citizens have done so.

Service engineer Vardharj Sunder Moorthy, 51, and his wife Jayalitha, 47, for example, are both active grassroots leaders in his ward, Teck Ghee, he said.

Television host Guo Liang lent some unexpected star power to the event, as his wife Shen Jie, 48, was one of those to receive citizenship yesterday.

She gave up her Chinese citizenship to become a Singaporean.

Mr Guo, who became a citizen in 2000, said: "Now we can travel as a family more easily, instead of having to apply for a visa for her all the time."