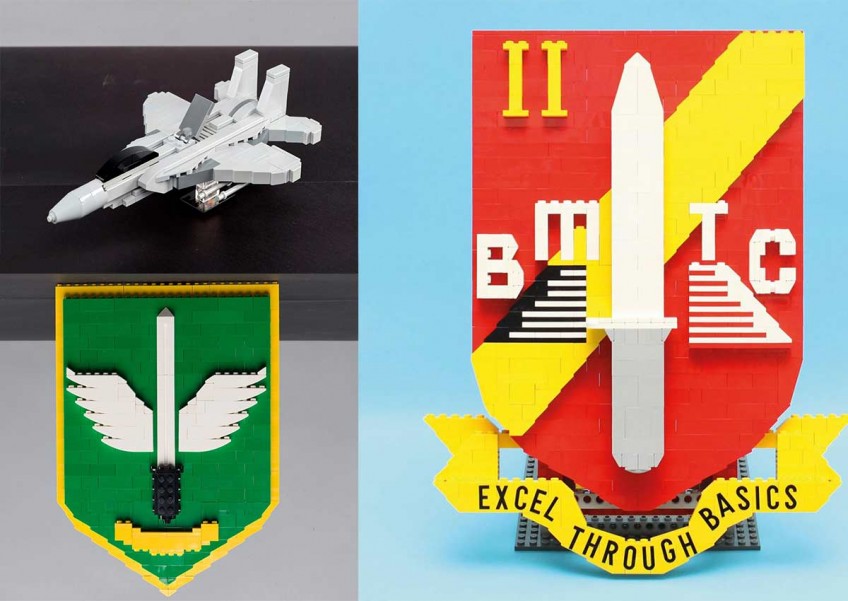 He's built one of those iconic dragon playgrounds we all love, an old TransitLink bus ticket machine and even famous Singapore landmarks like the Merlion and the Changi Airport control tower.

He did it all with Lego bricks and to date, he has some 250,000 Lego parts which he has sourced on his own from all over the world.

His works which cost anything from a few hundred to thousands of dollars are largely commissioned by organisations or companies, or built out of his own personal interest.

Singaporean Mr Jeffrey Kong, 37, has now caught the attention of Defence Minister Ng Eng Hen after he built a series of brick pieces inspired by the Singapore Armed Forces such as an F-15SG fighter jet, the SAFTI MI tower and the BMTC 2 School logo.

In a Facebook post on Wednesday (March 22), Dr Ng referred to Mr Kong as a "Lego Master" saying that his time as a regular officer in the Army "must have served as an inspiration for his SAF pieces".

In particular, the Lego version of the Republic of Singapore Air Force's F-15SG posed a real challenge to him because he wanted to make sure the model aircraft came out perfect.

He said: "This was a satisfying challenge because it took me a long time to nail the proportions in such a small scale, and I made sure the wings were completely smooth on top."

"By figuring things out on my own, I was able to apply many of the same principles to other works. So this was quite an intellectual endeavaour."

Mr Kong runs Artisan Bricks, a company which creates commissioned Lego brickworks, but only started dabbling in the craft when his father was diagnosed with cancer in 2012.

While spending time with his father at Tan Tock Seng Hospital, Mr Kong tinkered with a Lego digital designer software and it took off from there.

His works later caught the attention of members of the public who expressed interest in buying his stuff, and learning how to do what he does.

"I started doing simple projects and now I can do a lot more," he said.

Since going full-time two years ago, Mr Kong says he enjoys a steady stream of clients who approach him to work on projects,

He firmly said: "I do not use paid advertisements or do cold calls."

Aspiring Lego enthusiasts who aim to take their skills up a notch should listen to these words of advice.

Mr Kong said: "It's not (about) how many bricks you have, it's what you do with them. I realised the lack of parts actually forced me to become creative, and many of my early creations are my attempt to create art with as few parts as possible."

"If you're a new builder, just start somewhere. Don't be afraid to try."