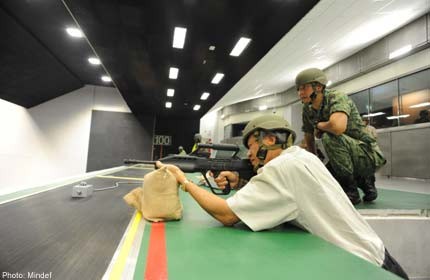 Minister for Defence Dr Ng Eng Hen firing a SAR-21 rifle at the Multi-Tier Range at the MMRC.

Speaking at the ceremony, Dr Ng highlighted the enhanced training effectiveness and efficiency the MMRC would bring to the Singapore Armed Forces.

He said "this newly developed MMRC, together with our existing outdoor ranges and the Murai Urban Live-Firing Facility, now offer SAF soldiers an impressive and comprehensive suite of training ranges that will hone the competency of SAF soldiers in a variety of combat missions."

"In addition to enhancing the effectiveness of training, the MMRC will improve the SAF's efficiency and significantly decrease the time required for marksmanship training," he added.

The complex is designed to be an all-weather range with lighting controls to simulate day or night conditions. Leveraging on advanced video targetry systems, the MMRC provides tough and realistic scenario-based training in both urban and conventional terrains to hone soldiers' basic and advanced shooting skills.

Also present at the ceremony were Chief of Army Major-General Ravinder Singh, senior officials from DSTA and senior officers from the SAF.