Dhaka can do more for migrants: Singapore NGOs 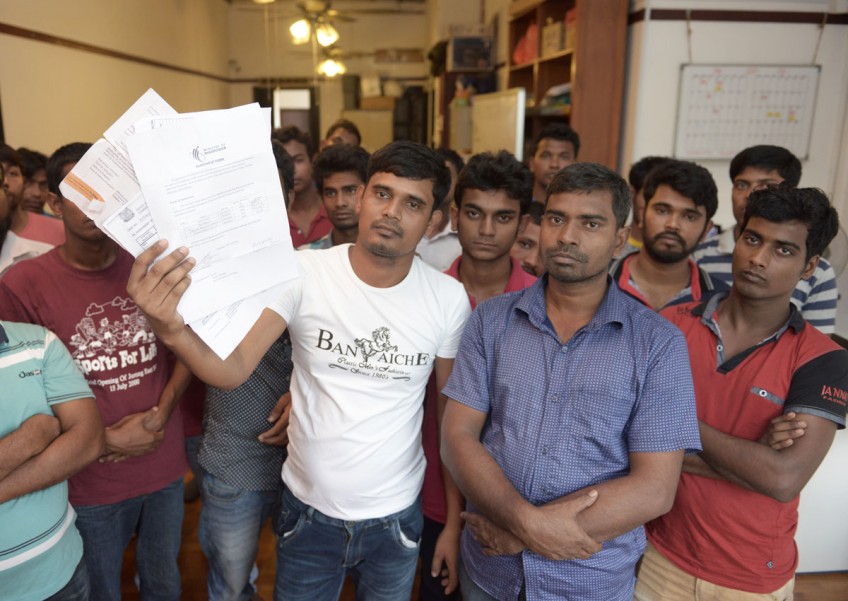 Two local non-governmental organisations (NGOs) have reported to the United Nations (UN) that the Bangladesh government is not doing enough to protect the interests of its workers in Singapore.

The Humanitarian Organisation for Migration Economics (Home) and Transient Workers Count Too (TWC2) sent a report to the UN Committee on Migrant Workers earlier this month on Bangladeshi workers' plight.

The UN panel meets in Geneva next month to review Bangladesh's commitment to protecting its workers under the International Convention on the Protection of the Rights of All Migrant Workers and Members of Their Families.

The Bangladesh High Commission in Singapore has refuted the report.

Its spokesman told The Straits Times that the mission is keeping a close eye on the recruitment process and, among other things, checks on workers' living conditions.

The two NGOs have said that one shortcoming of the Bangladesh government is its failure to regulate recruitment agents.

"Workers may be lured by deceptive recruitment practices and find, upon arrival in Singapore, that wages and working conditions differ from what was promised back home," they said in a statement accompanying the report.

The Bangladesh government also failed to prepare its workers before they arrived in Singapore, the NGOs claimed, and it did not work with the Singapore Government to improve work and living conditions.

"The absence of support and assistance by the Bangladesh mission leaves some Bangladesh nationals in precarious conditions.

"Many workers, especially those who have been cheated by recruiters, often return to Bangladesh not knowing how to seek redress. They are not aware of their legal rights."

There are about 160,000 Bangladeshi workers here, with most working as construction workers, shipyard workers and cleaners, earning less than $20 a day.

"As much as we would like the Singapore Government to do its part, TWC2 wishes also to impress upon the Bangladesh government that it too has a responsibility to its own citizens," said TWC2 treasurer Alex Au on the purpose of the report.

Home's social worker Stephanie Chok, who worked on the report, said that the report could lead to greater co-operation between Bangladesh and Singapore in protecting the workers, as the issues cut across national boundaries.

The high commission, refuting the report, said that it has approved 14 recruiters who can send workers to Singapore and is intensively monitoring the hiring process.

"The high commission is actively engaged in ensuring maximum welfare of the expatriate workers," its spokesman said, adding that its officials make regular visits to dormitories to check on the workers' welfare and living conditions.

Workers also get legal and financial aid and counselling when they face problems such as salary disputes and work injury compensation, the spokesman added.

"The High Commissioner himself listens to the workers and passes necessary directives to the official concerned in ensuring the workers' welfare," said the spokesman.

Singapore's Manpower Ministry, when contacted, said that there is in place "a comprehensive set of legislative, administrative and promotional measures to protect the rights of all our foreign workers, regardless of nationality".

"Singapore reviews its regulatory framework periodically to ensure the well-being and rights of foreign workers are safeguarded," it added.