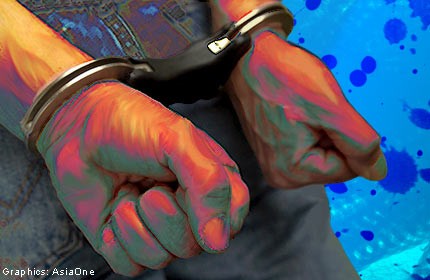 TEMERLOH - Police shot dead two men believed to be hardcore members of the so-called Didi Gang, which allegedly has a terror network across the country that kills, steals and deals in drugs.

A Smith & Wesson .38 revolver, a parang, a knife and tools believed to be used for burglary were found in the car used by the suspects during the shooting at around 10pm on Friday.

Upon noticing the police officers, one of the suspects scrambled out and fled. At the same time, the driver rammed his car into the police patrol vehicle and sped off.

The police car then followed the suspects' vehicle. As the policemen neared the Proton Wira, several shots rang out from the car.

"Our officers returned fire in self-defence. One of the suspects also tried to get away but we managed to capture him.

"The driver and his front seat passenger were killed during the exchange of gunfire," he said, adding that the dead suspects were identified as Mohd Fahmi Hisham Rahim, 28, and Mohd Shazmier Mohd Yusof, 24.