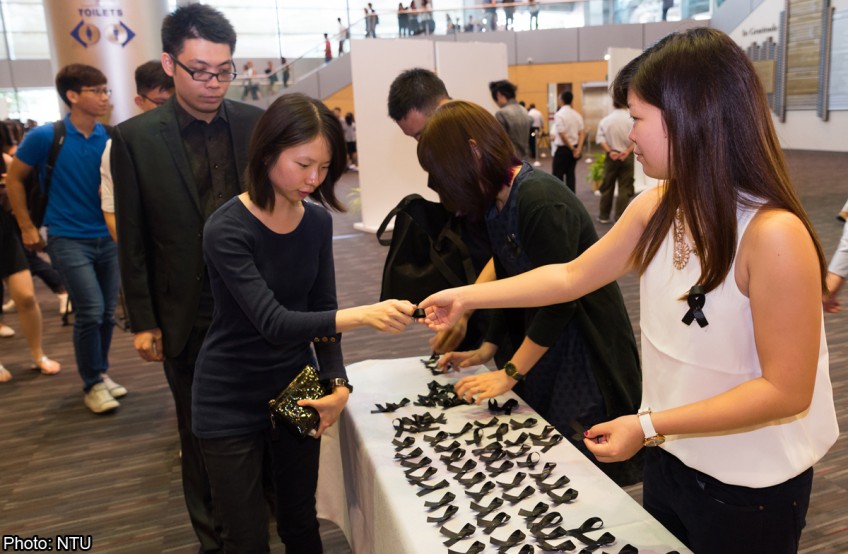 A group of students from Nanyang Technological University made and distributed 1,500 black ribbons as a symbol of remembrance. NTU held a memorial service yesterday to honour Mr Lee.

MOTORISTS have a new way to remember Mr Lee Kuan Yew by.

He saw the graphic of Mr Lee's silhouette within a black ribbon that went viral online and is being used by many as their Facebook profile picture. Inspired, he got his staff to print 800 stickers and give them away for people to put on their vehicle's window.

The 40-year-old said it is "just something to remember Mr Lee by. He's someone whom I've held in very high esteem".

People streamed into the Dynamics Mechanic workshop in Kaki Bukit to pick up the decals from 9am yesterday. By 5pm, they were all gone. The firm's Facebook page was also inundated with queries about the stickers.

Mr Chew intends to print more and give out 800 every day till "maybe Thursday or Friday".

The cost of 40 cents a sticker was not an issue, he added. This was despite the fact that five of his staff had put in long hours producing the decals.

This meant the workshop was functioning at half its usual productivity.

He said it was not a marketing stunt, adding: "We don't promote anything when people come to get decals. We just let them take the decal and go. This is just a goodwill gesture for car enthusiasts to have something to remember our founding father by."