Diplomats serve pretzels and pastries for a cause 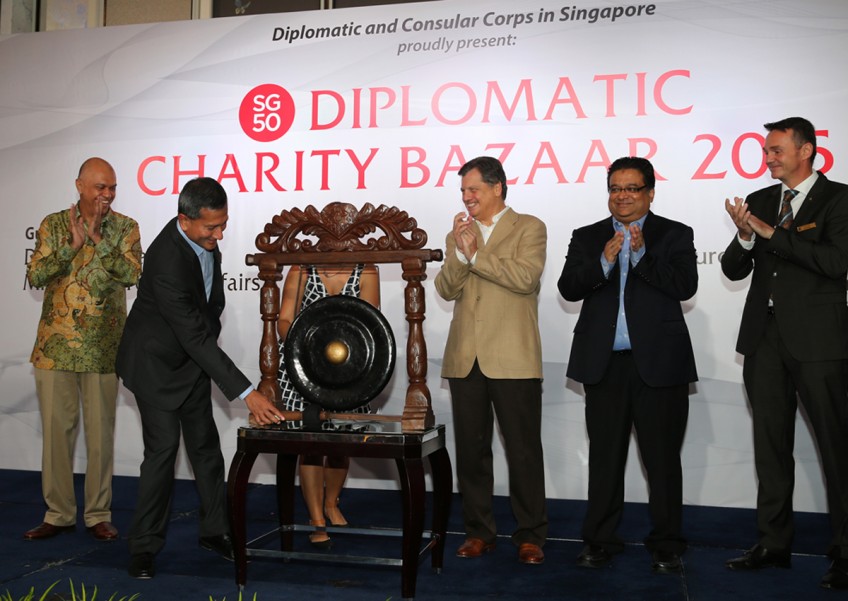 A blend of delectable smells signalled that a round of food diplomacy was under way yesterday at the Shangri-La Hotel, as resident diplomats here hosted a charity bazaar in celebration of Singapore's 50th birthday.

They made a total of about $60,000 through the sale of food - ranging from German pretzels to French pastries, and nasi katok from Brunei - and products from their home countries, as well as raffle tickets. The net proceeds will go to The Straits Times School Pocket Money Fund (SPMF) and Singapore Children's Society.

It is the first time the Diplomatic and Consular Corps has organised such a large-scale event, which saw the participation of over 40 countries, or more than half of the 70 diplomatic missions here.

Besides food, wooden lacquered vases from the Maldives, embroidered bags from Bangladesh and jewellery from India were some of the items sold at the 44 booths.

There were also 15 cultural performances involving some 158 people, including a Mongolian violin recital and folk dances from Greece, Laos and Sri Lanka.

"It is remarkable to see so many nations gathered here today, actively cooperating and uniting for a noble cause," said Mr Serra in his welcome address. "I hope it will make a difference to the children being supported by the charities."

He told the media: "The diplomats who are based in Singapore obviously feel that their time here is meaningful, that their relationships built up among each other as well as with the local Singaporean community are things which they treasure."

Indonesian Ambassador Andri Hadi, who led the organising committee, said: "It is our way of saying thanks for the warm hospitality given to the diplomatic community by Singaporeans and the Ministry of Foreign Affairs."

Mr Serra and Dr Hadi, who have both served as ambassadors here for around four years, said that they hope the charity event will become an annual affair.

Beauty salon owner Julie Poh, 38, who volunteered in the publicity and raffle draw working committee with the Ugandan Embassy team, was impressed by how the various nationals were very clear of their identity.

"They really bring their best from their country to share with Singapore," she said.

Kate Fitzpatrick, 11, of Avondale Grammar School's kapa haka group, said the Maori performance was something to remember. "I'm proud of the passion that New Zealanders have for what we do and who we are," said Kate.

Families from far and near mingled throughout the five-hour event at Shangri-La Hotel, which sponsored the venue, with an estimated 4,000 visitors.