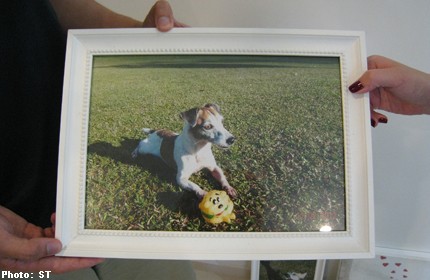 Tiger, a jack russell terrier, died on July 22 after playing at Block 412, Commonwealth Avenue West. The town council has warned the firm involved.

SINGAPORE - A pest control firm has been given a warning after a dog died from eating poisoned bread meant to kill pigeons.

Tiger, a jack russell terrier, started limping, trembling and foaming at the mouth after apparently swallowing bait left by the side of a Housing Board block.

The 10-year-old pet was rushed to see a vet but died on the way.

West Coast Town Council told The Straits Times it had warned its pest control contractor to comply with safety procedures.

Meanwhile, Tiger's owners said they feared children playing nearby could touch the bread and get poison on their hands.

"Do they really want a human life taken before they do something?" asked Mrs Regine Chan, 32, an executive. Her husband Alvin Chan told The Straits Times their pet died on July 22 after playing at the void deck of Block 412, Commonwealth Avenue West.

First, Tiger disappeared to the side of the building.

A cleaner then walked out and said "cannot makan (Malay for "eat"), got problem", before sweeping pieces of bread from the floor.

Within minutes, Tiger started to limp. The trembling then began in the animal's legs, before spreading to the upper body.

Before long, the dog was foaming at the mouth, with eyes bulging.

Shocked and confused, Mr Chan rushed Tiger to Mount Pleasant Animal Medical Centre in Sunset Way but the pet died before they got there.

The 37-year-old former bank analyst said a vet confirmed that poison was the cause of death.

Suspecting that the bread was meant to cull pigeons, Mr Chan and his wife contacted West Coast Town Council and the Agri-Food and Veterinary Authority (AVA).

Last week, the council told The Straits Times that a pest control technician had been culling pigeons at the time the dog died.

The employee from Clean Solutions laid the bait and went to check for nuisance birds at two other blocks, before coming back.

This contradicts AVA guidelines that say somebody should be on hand to supervise the whole process.

"We have warned our pest control contractor to comply with the standard procedure," said a council spokesman. She added that residents used to be notified before the culling started. But this practice was stopped because people kept deliberately feeding the pigeons in advance so they were too full to take the bait.

The AVA confirmed it has guidelines that cover issues such as how to dispose of dead birds and remove any remaining poison.

Clean Solutions told The Straits Times that it provides pest control to five town councils and this was the first time a pet had died.

A spokesman said pigeons are culled using a chemical called Bird Cool, which is usually mixed with bread, grain or green beans before being left out as bait.

He added that the company will assign two men to the job in future, instead of just one.