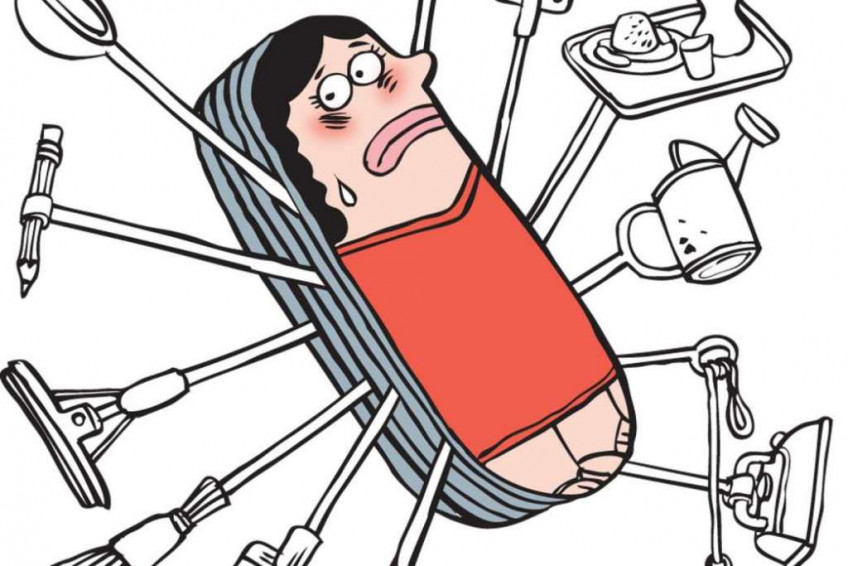 On balmy nights, a Filipino domestic worker in Yishun walks the many dogs that her employer takes in as a pet boarder.

Over in town, in Circular Road, a maid who has already spent hours cooking and cleaning in her employer's home does a double shift at the employer's restaurant as a member of the wait staff.

She gets a grand total of five hours off each month. After nine months, she runs away from her employers.

Domestic helpers these days have become jills of all trades.

But while that sounds like good news for the one in five resident households here employing a maid, overtaxing them can actually hurt loved ones.

This issue of domestic helpers' duties came under the spotlight earlier this month, when a judge wondered if it was "the system's fault" that a maid dropped a suction cap down a disabled boy's throat.

Kusrini Caslan Arja, 37, was trying to remove phlegm from the four-year-old's windpipe when the suction cap fell down his throat. Her attempts to pull it out caused him to bleed.

She was sentenced to four months' jail last week. The prosecution had asked for 18 months.

District Judge Low Wee Ping said: "We employ domestic maids to be car washers, gardeners, plumbers, nurses, when they should not. When they do something wrong, we point fault at them."

One reason for maids' expansive job scopes is that the rules are vague.

The Employment of Foreign Manpower Act says that foreigners employed as domestic workers can only "perform household and domestic duties at the residential address as stated in the work permit".

"The reality is that employers have significant power over domestic workers," said Dr Walter Theseira, economist and senior lecturer at Singapore University of Social Sciences.

Because there is a ready supply of domestic workers, employers get to send them home at will - which is costly for the maid who has paid fees to secure her job, he said.

Read also: Couple jailed for starving maid and causing her to lose 20kg

The Manpower Ministry wants to give employers flexibility, said Mr Jolovan Wham, acting executive director for the Humanitarian Organisation for Migration Economics, and is "therefore reluctant to restrict what domestic workers can and can't do".

Indeed, while younger families may need a domestic worker to help out with household chores and child-minding, those with ailing parents need someone to bathe and change the clothes of the elderly and give them medication.

Those with disabled family members need help with caregiving duties, some of which may require special medical training.

A family expecting the maid to do too much can cause harm to their loved ones, when the domestic worker is not adequately trained or is overworked and more prone to becoming negligent.

Kusrini, for example, had only had six years of primary education and was not medically trained.

Her lawyer, Mr Mahmood Gaznavi, said that despite this, she was tasked with the care of the bedridden boy and received only two days of training from the boy's parents on how to operate the machine.

Mr John Gee, executive committee member at Transient Workers Count Too, said: "A domestic worker should not take on any medical role for which she has not had proper training."

And even trained helpers should not be given too many caregiving duties and household chores, said experts.

Mr Manmohan Singh, director at AWWA Centre for Caregivers, said: "Even if you're caring for your loved one, the situation can get overwhelming when you're stretched, having to do everything and there's no help. You're going to burn out and break down."

There are maids with caregiving certificates, but they would expect salaries of $650 to $1,000 a month, compared with $550 for regular maids.

Association of Employment Agencies (Singapore) president K. Jayaprem said: "Employers are not ready to pay higher salaries. They say they will take on an ordinary domestic worker and train her up."

Singapore is not alone in needing domestic helpers to discharge caregiving duties.

The International Labour Organisation (ILO) said this is the "onset of a care crisis" that many countries are facing: an ageing population and more women joining the workforce.

Read also: Maid who ill-treated boy had 'no medical training', gets 4 months' jail

Nor is Singapore alone in not wanting to set hard and fast rules.

The ILO's 2011 Domestic Workers Convention - which sets out to give rights to these workers, including clear employment terms and job scopes - has been ratified by only 23 countries.

Another of the organisation's treaties, dealing with discrimination, has 174 ratifications.

In the developing and emerging economies of Asia, 61 per cent of domestic workers remain outside the scope of labour legislation, said the ILO.

One place with clear job scopes for domestic workers is Taiwan.

Taiwan has made a distinction between helpers who look after children under six and do household chores, and caregivers whose charges are the elderly and those with disabilities.

Those hired as caregivers do not perform household chores.

And if a family wants their domestic helper to perform caregiving work, the worker has to consent before the Taiwanese government approves it.

In Hong Kong, certain roles are a no-no. Domestic helpers there cannot give massages or act as chauffeurs.

In Singapore, the authorities here have said "no" to some jobs. High-rise window cleaning, for example, must be supervised and maids cannot work for employers' businesses.

But Singapore can do better in defining domestic workers' duties, rather than leaving maids at the mercy of employers' demands.

Among the ludicrous roles that Mr Wham has heard of in his interactions with maids over the past 12 years are: masseuse, Kumon-style tutor and assistant to a temple medium performing rites.

Anecdotally, it seems not uncommon for maids to massage household members - male or female. As Hong Kong has done, Singapore should state clearly that this goes beyond the scope of their work.

Another line that can be drawn by Singapore is mandating that maids be given proper, certifiable training for the medical tasks they are expected to perform.

Since the Government hands out levy concessions for those hiring maids to care for the elderly or those with disabilities, it can also - when approving the concession - make it contingent on the workers having the necessary skills.

However, he said that training maids for caregiving roles should only be a stopgap measure. In the long term, Singapore ought to have "more specialised recruitment and training".

He said families should rely on local caregivers to come in and give specialised care, such as bathing a bed-bound patient.

While Mr Wham agrees, others, such as Dr Theseira, feel that if a family member is expected to perform home caregiving roles for a discharged patient after some training from the hospital or nursing home, "then surely a foreign domestic worker can also be expected to do so".

Barring splitting housekeeping and caregiving roles, the best way to protect helpers and loved ones from sloppy care by an overworked maid is empowering the women with rights and an avenue to seek help.

Mr Gee said: "This means regular days off, being able to hold on to their own mobile phones and communicate freely with the outside world, and being protected against arbitrary dismissal and repatriation.

"If a worker can't get on with her employer or feels that her employment conditions are unfair, it should be made easy for her to change employers without returning to her country first."

Letting maids live outside employers' homes can also help manage their workload, said Dr Theseira. "The problem of workload is largely caused by the fact that domestic workers are live-in and hence expected by some employers to always be on duty."

If employers cannot ship maids home willy-nilly, it will address the power imbalance between maids and families here, he said.

"Many accept high workloads which sometimes border on abusive because they fear the consequences of refusal - which could include being sent home without completing their contract. If domestic workers believe they have reasonable options in the Singapore market, they will be more capable of resisting unreasonable demands, and employers also will realise that they cannot push their helpers too hard," he said.

And if maids have an avenue to go to for help or to complain, or even an option to up and leave, then perhaps employers will lay off the unreasonable demands.

Until then, the least the Ministry of Manpower can do is draw a red line under some unreasonable demands and have a blacklist of chores that domestic workers shouldn't have to do and a list of chores that they need to be trained for to attempt.