A delivery guy on an e-scooter was hit by a car while crossing a road when the red man was showing on a traffic light.

A video of the incident was posted on Roads.sg's Facebook page.

According to the time stamp, the incident happened on Nov 29 at 9.54pm but the location is unclear.

In the video, the driver has the right of way when the e-scooter rider begins crossing the road.

Unable to brake in time, the drive runs into the rider whose body hits the driver's windscreen, cracking it.

The rider then falls to the ground.

Drivers please be extra careful on these wet days with low vision. Be on special look out for pedestrians and e-scooters...

Yesterday (Nov 30), there were two accidents involving e-scooter riders, one at Kaki Bukit and the other at Woodlands. 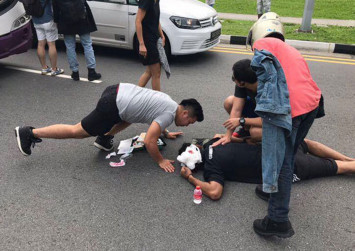 In the first case, 52-year-old Atan Amat was hit by a double-decker bus.

He subsequently died in Changi General Hospital after succumbing to his injuries.

In the Woodlands case, a 16-year-old boy was taken to Khoo Teck Puat Hospital after an accident with a car.