Joseph Low Moh boon pleaded guilty on Sept 11 to causing the death of his friends by driving in a rash manner.

SINGAPORE - Traces of drugs including ketamine were found in blood and urine samples of a delivery driver who crashed his van into a tree in Bukit Timah Road, killing his two passengers.

They were out earlier that night celebrating Low's birthday.

On Wednesday (Sept 11), Low pleaded guilty to causing the death of his friends by driving in a rash manner.

The court heard that after completing his last delivery on Oct 19 last year, Low headed back home in the direction of Woodlands and picked Mr Chioh up on the way at around 10.30pm.

While Low took a shower, Mr Chioh went to meet Mr Michael, who lived nearby.

The delivery driver initially told Mr Chioh that he did not wish to go out as he was tired but the older man insisted as it was Low's birthday the next day.

The trio then went to a pub in Jalan Besar where they ordered three jugs of beer. Low admitted to drinking some of the alcoholic beverage.

The three men left the pub together early the next morning and eyewitnesses later spotted Low's van speeding along Bukit Timah Road.

At around 3am, it crashed into a tree, killing Mr Chioh and Mr Michael. 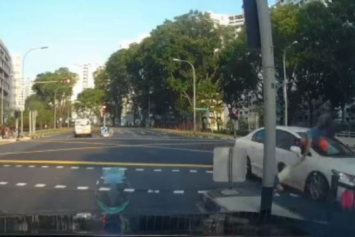 "At the time of the accident, the weather was clear, the road surface was dry, traffic flow was light, and visibility was clear," said Deputy Public Prosecutor Foong Leong Parn, presenting video evidence of Low's van drifting at a high speed down the road, then crashing.

The Health Sciences Authority estimated that before the accident, Low had been driving at speeds of up to 122kmh - double the speed limit on the road.

DPP Foong said that Low had a history of speeding, with his last violation in Jan 24 last year. That was less than 10 months before the fatal crash.

Additionally, a toxicology report found traces of alcohol and various drugs in Low's urine and blood samples, including the illegal narcotic ketamine.

The DPP said: "It is abundantly clear that the accused's rash act in the present case was not a momentary misjudgment.

"In fact, the accused's driving was a prolonged and deliberate course of reckless driving, starting from the time when he was already feeling tired even before meeting his friends and yet choosing to drive, driving whilst under the influence of alcohol and drugs, and speeding right up to the point of the collision."

She urged the court to sentence Low to two years' jail and disqualify him from driving all classes of vehicles for 12 years.

The case has been adjourned to Sept 30 for a hearing to determine if Low was under the influence of drugs before the crash.

For causing the men's deaths by rash driving, Low can be jailed for up to five years and fined.