Duo arrested for stealing at least 20 bicycles in Tampines 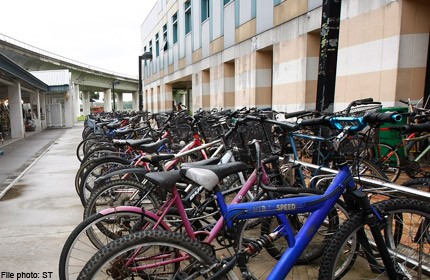 SINGAPORE - A 22-year-old man and 20-year-old woman were arrested in connection with a series of bicycle thefts in Tampines.

On Oct 10 at about 11.30pm, police officers were conducting patrols in Tampines Central when they spotted the suspects who were riding separate bicycles. The officers decided to conduct a check on them, but the male suspect fled when they were approaching.

The female suspect, however, was stopped had her haversack searched by the police. They found a bolt cutter, screw drivers, pliers and an adjustable spanner which are suspected to be implements used for at least 20 cases of bicycle theft in Tampines.

The bicycle she was riding was believed to have been stolen from a bicycle bay located at Tampines MRT Station.

Her alleged accomplice was arrested the next day in a Geylang hotel.

The duo will be charged in court on Oct 12, and face a jail term of up to three years, a fine or both if convicted. A court order will be sought to remand both suspects for further investigations.