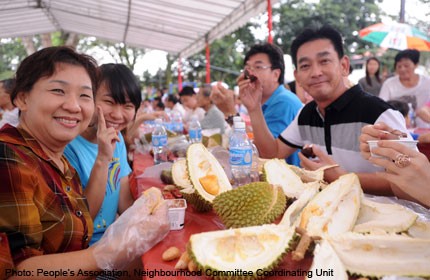 SINGAPORE - During durian season, employees at local book distributor Penguin Books Singapore look forward to satiating their appetites and having a good time together after work at durian parties.

"Many people love eating durians, some with great passion, so it's something a lot of us here have in common," said Ms Loi Zhi Wei, 36, senior manager of product and marketing.

She told My Paper that the company has already organised several durian parties, with a recent one held on July 29.

"(The durian party) definitely got everyone together," added Ms Loi.

Many Singaporeans have also been using durians as the perfect excuse to gather as a community for a good time, from organising grassroots initiatives to private parties.

This is especially so of late, as the "best" durian season is believed to fall between June and August.

Dr William Wan, general secretary of the Singapore Kindness Movement, said he hoped to use the fruit as a binding factor to "create conversation" among people, even strangers.

The paid event, which took place at the Telok Ayer Community Centre and Hong Lim Park, offered a wide selection of durians - including Mao Shan Wang and D24 - to some 300 participants. Profits from the event will go towards organising a similar charity durian gathering for the Prison Fellowship Singapore, which supports prison inmates and their families.

Dr Wan said he hoped that the durian event would help develop friendships among durian lovers and "revive the open, inclusive kampung spirit through this communal activity".

He explained that, these days, "the idea of community is getting fuzzy, because everyone is always in a hurry". He added that some people do not even know their neighbours.

Dr Tay, known for his ieatishootipost food blog, has been organising such durian-degustation events since 2008.

"The durian culture in Singapore is unique, it's almost like a national pastime," he said.

For research associate Samantha Ong, 24, durian eating is a pastime that she and her close-knit group of friends indulge in to satisfy their "cravings".

On such occasions, they simply talk, laugh and have a good time, she said.

"I think we can even get 'high' on durians sometimes," added Ms Ong.

Grassroots committees, too, have been using durian parties to promote interaction among residents.

For example, the Thomson Hills Neighbourhood Committee held a durian party on July 27, where over 500 residents turned up for the feast. When the event was first started in 2009, only 150 residents participated.

Besides allowing residents to bond, the event also helped to raise awareness about estate issues such as dengue and crime prevention.

"When residents participate in (these durian parties), they feel more vested in the place they live in," said a neighbourhood-committee spokesman.