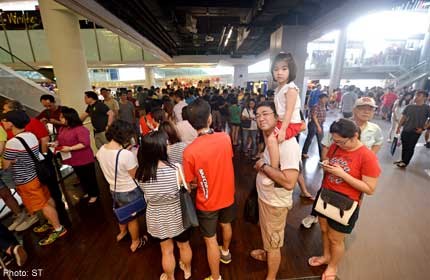 While the shutters were still down in most of Orchard Road, some 200 participants of The Straits Times' Run in the Park created a buzz of activity at Level 5 of Orchard Central as early as 10.30am Friday.

They were there to collect their race packs for the Aug 25 race, and were in line before collection started officially at 11am.

Mrs Pushpa Winter, a 52-year-old housewife, was first in line, arriving before 10am to collect the race packs for herself and her family.

She said: "I decided to come early because I had to wait quite long the last time I collected a race pack for another race here."

She will be running in her first 15km race with her husband Stephen, 55, while her two children aged 13 and 16 will take part in the 10km event.

She said: "I picked up running only this year, and I'm really hoping I can run the whole 15km without stopping to walk.

"This is also a good form of family bonding. We need to guide the younger ones and get them on a healthy and active lifestyle."

Another participant, Mr Chew Chow Cher, is also using the race to spend time with family and friends. The self-employed 45-year-old is taking part in the 5km fun run with his wife and two children, as well as his friend, Mr Tan Ah Khong, and his son.

Said Mr Chew, who planned to go to Punggol Waterway, where the race will be held on Friday to check out the route: "We're not taking part to be competitive.

"We've not gone there before, but it seems the scenery will be quite good, so we're just going to have fun and take pictures along the way."

Others will be using the race as a chance to help the needy.

Mr K. Sashi, 41, is raising funds for Save the Children, an international organisation that supports children in developing countries, through his participation.

Said the scientist, who is running with his seven-year-old son and 12-year-old nephew: "The driver for me (in taking part) was really to teach the kids that there are children out there who need help."

Some 12,000 runners have signed up in the three categories of the inaugural event, organised by The Straits Times as part of the Straits Times Appreciates Readers programme to reach out to our readers and the community.

Runners have until Sunday (11am to 8pm) to pick up their race packs. The items in the race pack are worth more than $168, in celebration of the paper's 168th birthday this year.

Besides a New Balance limited edition "Lightning Dry" event T-shirt worth $49, other items include an $80 Clinique voucher and a $33 ticket to Resorts World Sentosa's SEA Aquarium.

Participants are reminded to bring their race confirmation slip and NRIC for collection. Those below the age of 18 will need to have a parental consent form.