Edusave extended to include madrasah students 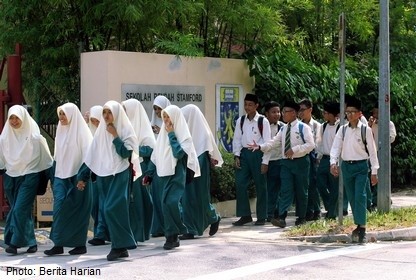 Edusave accounts and contributions will be given to all students of school-going age, such as madrasah students, those studying abroad, and the home-schooled, Prime Minister Lee Hsien Loong said in his Malay National Day Rally speech on Sunday night.

"This is a signal that we value every child, and will help build a sense of solidarity among the next generation," he said.

Currently, only students in national schools have Edusave accounts and government contributions to those accounts, which fund enrichment activities.

Mr Lee said that there was a longstanding issue of children in other schools - including madrasahs - feeling left out, and that Malay People's Action Party MPs had raised this issue with him over many years.

In his Malay speech, Mr Lee also encouraged the Malay-Muslim community to do more and make better use of government support to address the community's socio-economic needs. But he urged them to be careful not to let competition turn unhealthy, or let activism result in race-based politics.

Mr Lee also acknowledged the worries about growing competition which some Singaporeans have, including Malay professionals, managers and executives.

There are also less-educated Malay workers who worry about competition from foreign workers, he added.

But he said he was confident that Singapore can succeed. Instead of worrying, workers should take advantage of training opportunities and meet competition head on: "This must be the fighting spirit that we must instil in the community."