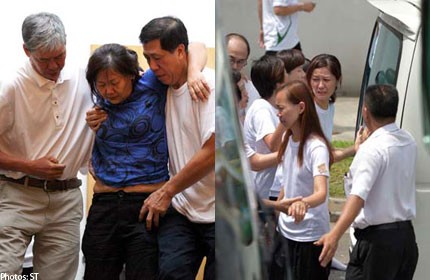 SINGAPORE - It was an emotional farewell for Kovan double murder victims Tan Boon Sin and Tan Chee Heong as over 100 friends and family members said their last goodbyes at the Mandai Crematorium on Tuesday.

Earlier in the day, family and friends were at the Teochew funeral parlour to take part in the funeral rites where Mr Tan Chee Heong's uncle, Mr Ong Boon Kok, spoke about his nephew.

Mr Ong said: "He was a gentle and quiet person.

"He was very introverted but very steady, and he treated people very well. He cared for his family, he loved his children, his wife, and he was a very filial son."

On the afternoon of July 10, the body of 66-year-old Tan Boon Sin, and that of his older son, 42-year-old Tan Chee Heong, were found about one kilometre apart.

The elder Mr Tan's body was discovered in his home and his son's body was outside Kovan MRT station.

A senior staff sergeant of the Singapore Police Force, 34-year-old Iskandar Bin Rahmat, was charged on Monday morning for the murders.

Mr Ong said: "Whether we see the suspect's face in person or in the newspapers makes no difference because he is still a murderer.

"We hope the truth will come out because we too are not sure what actually happened that day.

"So we hope the police will solve the case as soon as possible and find the real murderer so justice can prevail.