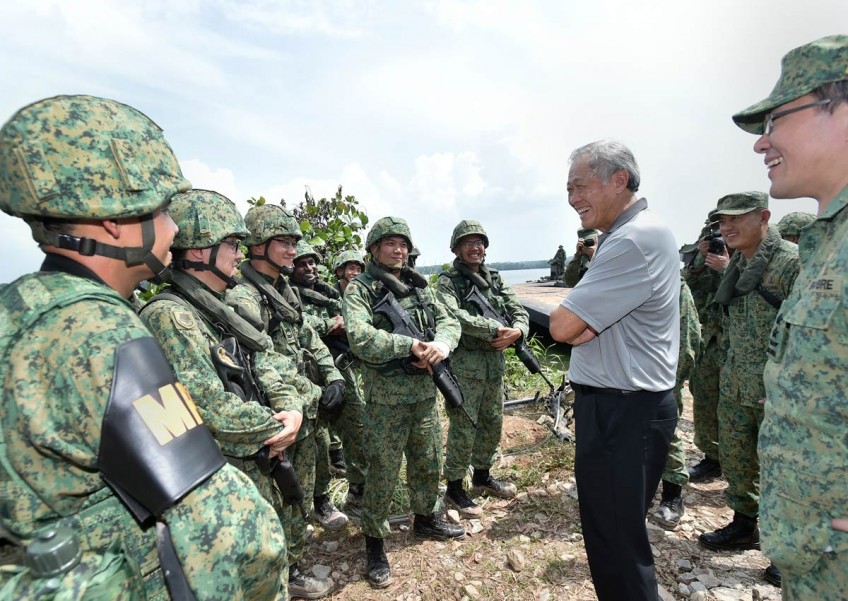 Defence Minister Ng Eng Hen, who visited an SAF rafting exercise in the western part of Singapore on Tuesday, said changes to the road network are part of the army's efforts to meet future challenges by "maximising the potential of its training areas".
MINDEF

The Singapore Armed Forces (SAF) will reconfigure and expand the road network in the Safti training area to provide a continuous space of urban and forested environments for troops to train in more realistic settings.

Defence Minister Ng Eng Hen, who visited an SAF rafting exercise in the western part of Singapore on Tuesday, said changes to the road network are part of the army's efforts to meet future challenges by "maximising the potential of its training areas".

"The idea is to have our battalions be able to mimic the terrain that they would (operate in) during conventional operations, move from urban terrain to natural terrain such as this, where there are axes to be crossed, and river bodies or water bodies to traverse.

"That will take us a good part of a decade, but it is a significant investment and the general idea is that we want to maximise the resources given to us," he was quoted as saying in a statement released yesterday by the Ministry of Defence (Mindef).

Dr Ng had announced last Friday in Parliament during a debate on Mindef's budget that a new training area - dubbed Safti City - would be built in the training area for soldiers to train in realistic settings.

The 88ha area - the size of Bishan town - will have a sector packed with shophouse clusters, high-rise interconnected buildings, low-rise residences, basement carparks, a bus interchange and an MRT station with multiple exits.

Another sector near the Poyan Reservoir will house a petrochemicals complex, warehouses, container parks and industrial buildings.

The Straits Times understands that the road network is for military use only and that the reconfiguration is part of the Safti training area's revamp, which will cost about $900 million and take 10 years to complete.

Besides underscoring the important role that combat engineers play as a vital support arm of the army, Dr Ng - accompanied by Chief of Army Melvyn Ong and senior SAF commanders - also spoke about the value of the exercise in honing the army's operational capabilities and readiness.

He said: "During National Day, many Singaporeans will be familiar with our M3G rafts in Marina Bay for the 21-gun (presidential) salute.

"But beyond the ceremonial functions, the real function of the M3G rafts is to allow the SAF to cross water bodies... I think it is a great boost for the SAF to be able to test these capabilities, and use these rafts for what they were meant for."

Mindef said "the training transformation efforts will allow the army to hone its ability to operate continuously across different terrains, and conduct realistic training to meet the needs of the next-gen army".

Dr Ng also applauded the professionalism displayed by the NSmen in the exercise, adding that a strong and effective SAF is made possible only by the commitment of the NSmen.

"We are full of confidence (in what) they have done. They understand the challenge, and they are very competent," he added.