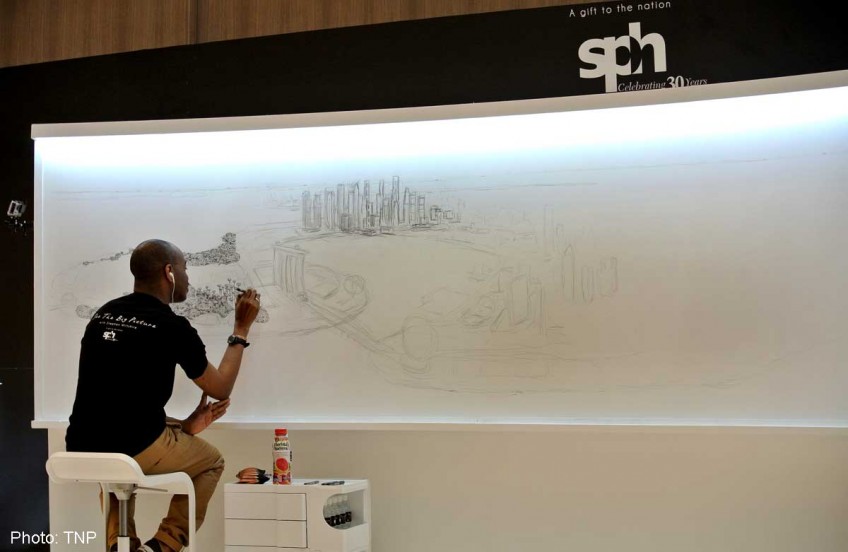 LIVE DRAWING: Stephen Wiltshire drawing Singapore’s cityscape from memory on the first day of the live drawing exhibition See The Big Picture at Paragon yesterday. He will be there until Sunday.

Miss Esther Choy is so passionate about art that she spent hours watching Stephen Wiltshire sketching Singapore's skyline yesterday - and she intends to return again.

The Lasalle College of the Arts student was still in bed when her mother told her that Wiltshire would be showing his unique skills at Paragon Shopping Centre.

Wiltshire, 40, is a world-renowned British artist whose unique talent is to draw accurate cityscapes from memory.

Miss Choy first learnt that he would be in Singapore two days earlier.

But she did not know when the public exhibition would start.

Her mother informed her when she saw the event set-up at Paragon. Wiltshire is showing off his skills at Paragon until Sunday (from 10am to 5pm). He is expected to complete the massive sketch at 6.30pm on Sunday.

"I first saw his art on Tumblr; I re-blogged it so many times.

"It's much better seeing his work here than online. You can see every single detail.

"And live drawing? What can get better than that?"

Miss Choy was at the exhibit when it started at 10am yesterday, and stayed until around 2.30pm to watch him work on the 4m-long, 1m-tall panorama of Singapore.

Now in the midst of her school holidays, she plans to return another day with her 11-year-old sister and again during the completion ceremony on Sunday.

Before Wiltshire began drawing yesterday, he went on a city tour and rode in a helicopter to get a bird's eye view of Singapore.

His sister, Ms Annette Wiltshire, accompanies him on all his travels.

She said: "Last night we didn't go out so he could study and make sure he's prepared. He has a little sketchbook, he does little rough drawings to plan."

Stephen Wiltshire was born in London in 1974.

He was diagnosed with autism at age three. He was speech-impaired and communicated through drawing.

He won many children's drawing competitions and sold his first work when he was just seven.

His career took off after he was featured in a BBC documentary in 1987.

He was awarded an Order of the British Empire in 2006, and an Honorary Life Fellowship from the Society of Architectural Illustration in 2011.

Although he also does oil paintings, he is famous for his detailed pen sketches of cityscapes drawn from memory.

He has sketched cities around the world, including Sydney, Venice, Hong Kong, and his favourite, New York .