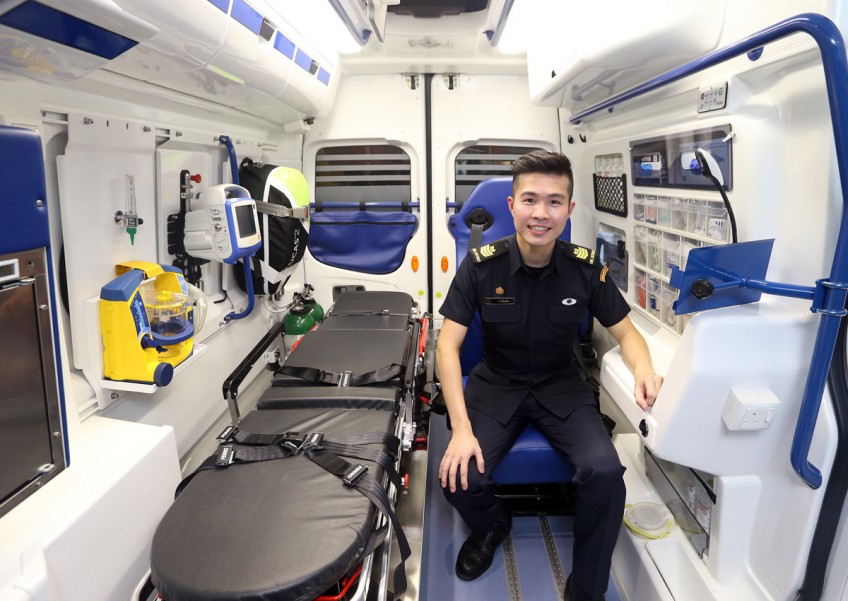 SCDF Paramedic Staff Sergeant Yeo Ren Jie, 27, designed some of the key features of the New Gen Ambulance, unveiled at the SCDF Workplan Seminar, held on May 6, 2016.
The Straits Times

Community programmes that once trained volunteers in lifesaving skills will be re-geared to focus on terrorist threats so that Singaporeans can better look out for one another.

These programmes will train individuals as "Community First Responders" who can react to emergencies before police and civil defence forces arrive. The hope is to have citizens trained at a basic level at least so they know how to help themselves and their families get out of harm's way.

Home Affairs Minister K. Shanmugam said the changes, which kick in later this year, would help save lives. He told SCDF officers at the closed-door seminar: "From SCDF's perspective, to have many well-trained volunteers around the neighbourhood will significantly reduce fatalities, increase the chances of survival and reduce the pressure on response times from emergency vehicles."

He added: "We will equip... participants with life-saving skills and emergency preparedness procedures, and they will be given advisories on what to do in the event of a terrorist attack and how to keep themselves and others safe." Community volunteers will be taught skills including first aid and fire-fighting, and be classified into three tiers, according to their skill level. At the lowest tier are "emergency prepared citizens" who, after a 45-minute online course, are expected to know how to help keep themselves and their families safe.

The top two levels are "bystander responders" and "volunteer life-savers". They will have to go through training of 21/2 and 4 hours respectively at the five SCDF Division Headquarters around the island.

These volunteers will learn basic first aid, CPR and fire-fighting skills, before moving on to more advanced techniques such as infant CPR. They will also learn how to react in various scenarios, such as during a bomb threat.

Explaining how the SCDF was recalibrating its approach, Commissioner Eric Yap said: "From building awareness on emergency preparedness, we will now level up the core competencies of the community to be first responders during emergencies."

A group of 1,000 NSmen will be part of SCDF's new Public Shelter and Resilience Unit. While they will be equipped with fire extinguishers and first aid kits, they will also go door to door to spread the SG Secure message and information on fire safety and emergency preparedness. SG Secure is a national movement that aims to build community resilience against the terror threat.

Mr Shanmugam said getting this message across to people was half the battle, adding that they would come forward to become volunteers if they believed in the cause.

Also unveiled at the seminar were new technologies SCDF plans to incorporate. These include a more advanced ambulance (see graphic), and a prototype exoskeleton suit, which will allow firefighters to carry casualties or heavier loads for a longer time.

The MDV has eight shower cubicles inside the vehicle and two other decontamination lanes outside, that can allow up to 140 casualties to be decontaminated each hour.

This article was first published on May 7, 2016.
Get a copy of The Straits Times or go to straitstimes.com for more stories.