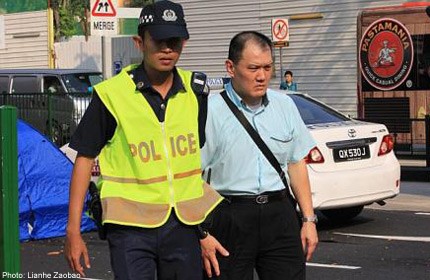 Chan Mun Hing at the scene of the accident in April, 2013. He allegedly failed to give way to a pedestrian when he was driving a double-decker bus. The victim was pinned under the bus and dragged for about 5m before it came to a stop.

SINGAPORE - A former bus driver has been charged with causing the death of the wife of a prominent professor at a pedestrian crossing in Clementi three months ago.

Chan Mun Hing, 48, faces a jail term of up to five years, or a fine or both, if he is convicted of causing death by a rash act.

He was driving an SBS Transit double-decker bus at the junction of Clementi Avenue 3 and Commonwealth Avenue West on April 23 when he allegedly failed to give way to housewife Zhang Huirui, 42.

Pinned under the bus, she was dragged for about 5m before the vehicle came to a stop. She was pronounced dead at the scene.

Her husband, Associate Professor Gong Jiangbin, who teaches at the National University of Singapore, collapsed in tears when he reached her body at the site of the accident, which occurred at around 7.40am.

Chan, who was charged last month, is currently out on police bail. On Monday, his lawyer Lim Hin Chye was in court, having just been briefed, and asked for an adjournment.

A pre-trial conference will be held on Aug 12.