Ex-SJI school ahead of curve in architecture 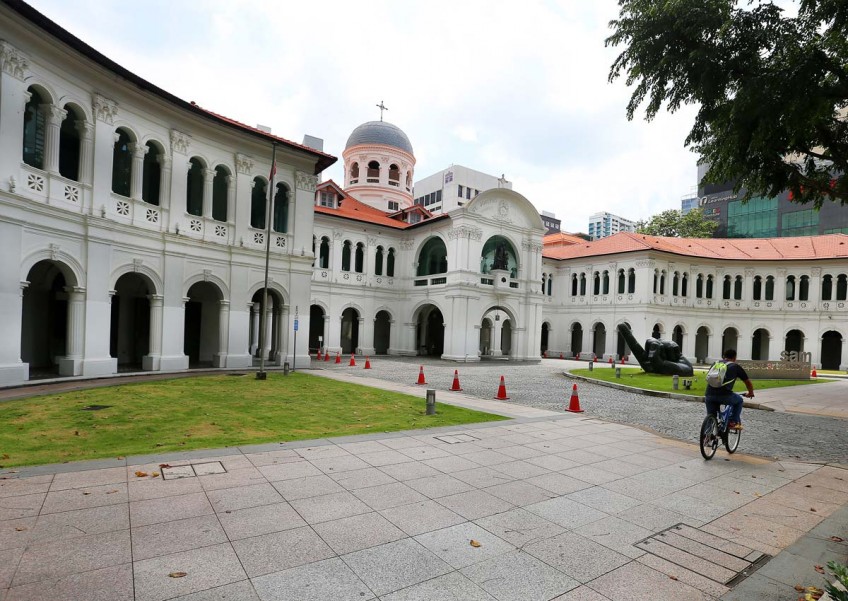 Viewed from the front, the Singapore Art Museum, which was previously occupied by St Joseph's Institution till 1987, makes a strong impression due to the symmetrical entrance foyer, curved wings and tall dome.
The Straits Times

From places of worship and educational institutions to the former residences of prominent figures, 72 buildings here have been gazetted as national monuments.

This is the latest in a weekly series revisiting these heritage gems.

Each is a yarn woven into the rich tapestry of Singapore's history.

It seems improbable that the defining architectural features of the old St Joseph's Institution (SJI) campus came about by accident.

After all, late SJI alumnus and educator Rudy Mosbergen strove hard to convey his wonderment at the sight of the school in Bras Basah Road with effusive lyricism.

"Silvery dome in the sunshine,/Outstretched wings reach out warmly," begins one stanza of a song Mr Mosbergen (who later became the first principal of Raffles Junior College) wrote to commemorate his alma mater's 125th anniversary in 1977.

In reality, the distinctively curved wings on the central building, which extend from either side of an earlier block built in 1867, emerged as a pragmatic response to unexpected engineering constraints.

In 1900, a survey was commissioned by the Lasallian Brothers, the Roman Catholic teaching congregation that operated the mission school, to determine if adding a third level to that block was feasible.

But its foundations, the survey concluded, were unlikely to withstand the weight of any additional levels.

With student enrolment rising at an alarming rate, then SJI director, Brother Michael Noctor, sprung for a lateral expansion, instead of building upwards.

He recruited Father Charles Benedict Nain, who was assistant parish priest at the Church (now Cathedral) of the Good Shepherd, to design the new wings, which were completed in 1903 to much fanfare.

A gifted and versatile amateur architect, Father Nain also designed the imposing Gothic chapel at the nearby Convent of the Holy Infant Jesus - itself a gazetted national monument since 1990.

Channeling baroque influences from the likes of Gian Lorenzo Bernini's colonnade at the Vatican, he designed an outward curve into both extensions and installed a two-storey-high colonnade across the new facade.

Even the "silvery dome" was a spontaneous addition.

To restore a sense of proportion against the visually arresting additions, a large dome replaced the tiny belfry atop the 1867 block.

Imposing doorways flanked with fluted columns were installed into the outer end of each "arm", completing the most recognisable building in the densely packed complex, which was collectively gazetted a national monument in 1992, after SJI vacated the campus in 1987.

The school chapel and a classroom block, dating back to 1912 and 1907 respectively, endure to this day.

Deemed to look too incongruous, three other blocks were demolished to make way for contemporary replacements in 1995.

The renovations by the National Heritage Board and Public Works Department were completed before SAM opened its doors.

Other changes included climate control to ensure visitors' comfort and preserve the art within.

Moving indoors through the entrance foyer of the central building, visitors are greeted by cool and airy gallery spaces throughout.

For students then, only the school library, geography room and debate room were air-conditioned.

"The library was the first school library to be air-conditioned in those days," SJI principal and Jesuit priest, Reverend Father Dr Adrian Danker, who graduated in 1981, told The Straits Times (ST).

"It was one of the leading school libraries in its time because it was very well stocked - a decision made by the Brothers."

But one particular space on the second floor came as a surprise during renovation works.

Only an innocuous columned archway, that now sub-divides a larger gallery space, betrays the discovery.

A huge set of cabinets spanning the entire wall once stood sentinel in front of it since a time beyond living memory, consigning the room behind to obscurity.

Until they were removed, that is.

The reason for the delay?

Speaking to ST, alumnus and SJI science teacher Jude Tan said: "The room that you see in SAM, which we (at SJI) now call the 'hidden chapel', was actually in Brother Kevin Byrne's office."

"(It was) only when they began renovating SAM and pulled down those cupboards that they found a door frame," said Mr Tan, 43.

He began studies at SJI in its final year of occupancy, later graduating at the then new Malcolm Road campus in 1990, but had previously frequented the campus for co-curricular activities in primary school.

"No Brother alive could put a finger to what it was, but looking at the door frame and the inscriptions there, the Brothers thought it could have contained an altar... used in the 1950s and 1960s."

Currently empty, the once hidden room, which is distinct from the main school chapel, awaits new artworks to be placed within. Deinstallation of works exhibited in the Singapore Biennale, which ended late last month, is ongoing.

The hidden chapel is just one of many anecdotes that have become a fixture of the SJI oral tradition, passed on by successive generations of students and teachers.

Another - decidedly more supernatural - legend takes the form of a "flying turban", said to be the ghost of a departed Sikh custodian.

"The jaga - he died in the school, at the place he normally sat," recalled Ms Balkis Bee, 69, who has been secretary to seven successive SJI principals since 1971 but has never seen it.

Mr Calvin Ow Yong, who teaches mathematics at SJI, encountered the turban only through hearsay too.

He suggests the rumour stemmed from the sight of the custodian when partially blocked by parapets.

"It probably started when people could not see him but only the turban he wore."