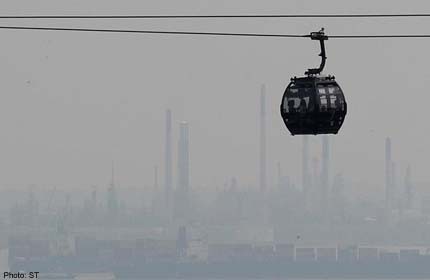 SINGAPORE - The hazy skies that affected Singapore on Tuesday morning are expected to persist over the next few mornings, as southerly winds blow smoke here from forest fires in Indonesia.

The latest spike is still relatively low compared with levels on June 21, when the reading peaked at 401 in the "hazardous" range.

But there was a buzz online on Tuesday as people posted photos on social media and voiced worries that the pollution was back.

Ms Geraldine Hor, a 24-year-old recruiting manager, said she could smell the haze from her 27th-storey office in Raffles Place. "There was a burnt smell in the morning," she said.

The National Environment Agency (NEA) said Singapore may experience slightly hazy conditions in the mornings over the next few days, due to low-level winds blowing from the south.

Thundery showers forecast for late morning and early afternoon today are set to bring some relief. As of 4pm on Tuesday, the 24-hour PSI ranged from 30 to 37.

Professor Ong Choon Nam, director of the National University of Singapore's Environmental Research Institute, said it was hard to predict when the haze would return.

"It depends on the wind direction, the number of fire spots over the past week and whether it will increase, and the rainfall in the region," he said.

The 24-hour PSI forecast that ends at 6pm today is expected to be in the higher end of the good band, or less than 50.

The 24-hour PM2.5 reading, which measures fine particulate matter less than 2.5 microns in size, is expected to be slightly elevated, but normal activities can continue.

In Riau, the Indonesian province closest to Singapore that is prone to forest fires, it has been raining almost every day for a week in the city of Dumai.

He added that it was normal for the number of hot spots to fluctuate, as farmers set fire to their land and those fires are then spread by the wind.