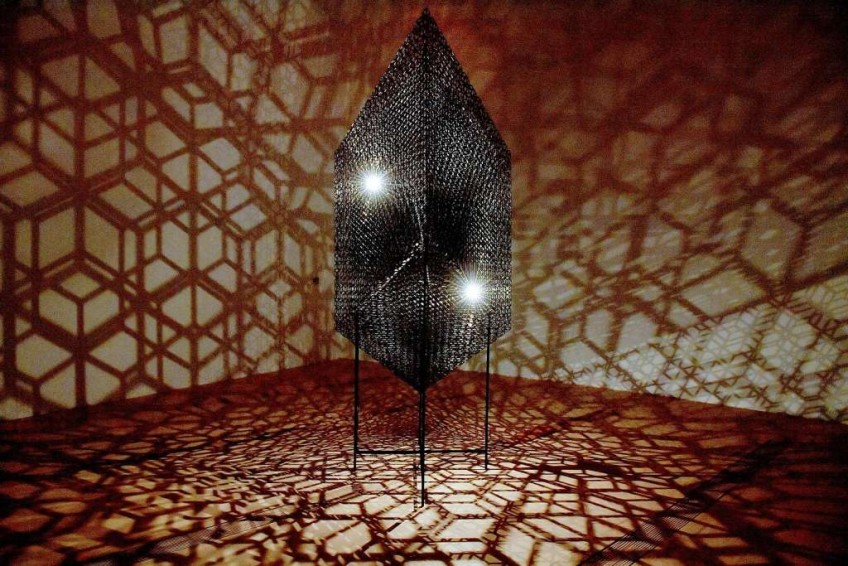 Slow Arc Inside A Cube VII by Conrad Shawcross comprises a mechanical sculpture with a hidden light source that creates moving geometric shadows in the gallery.
The Straits Times

The answer to life, the universe and everything in it might be found in the newest exhibition at the ArtScience Museum.

Titled The Universe And Art, the show features 120 artworks, scientific artefacts and manuscripts which deal with people's notions of the universe through art and science.

This includes first-edition manuscripts detailing the theories and findings of important individuals in the field of science - Galileo, Kepler, Newton and Copernicus.

These texts - which are about 300 to 500 years old - are being shown for the first time in Singapore.

It is jointly curated and organised with Japan's Mori Art Museum, where the first iteration of the show closed in January.

This is the first time both museums are working together. The exhibition is divided into four main sections.

The first section looks at historical cosmologies from around the world - how humans, primarily from the Buddhist, Hindu and Jain religious traditions, conceived the universe.

This section includes 16 artefacts from the collection of the Asian Civilisations Museum (ACM), including an astrolabe, or ancient astronomical measurement device from Iran, and historical texts by astronomers from the mediaeval Islamic world, such as Persian astronomer, mathematician and philosopher Nasir al-Din Tusi.

"It is cultural astronomy - a study of how different cultures through the ages have thought about the cosmos - and how they manifest them in different ways," says ACM's assistant curator Conan Cheong.

Also on display in Singapore for the first time is a 17th-century handscroll of Taketori Monogatari (The Tale of the Bamboo Cutter). It describes a visit of a moon princess to Earth.

"It is considered the oldest written story in Japan and also the first story that talked about our encounter with aliens," says Ms Reiko Tsubaki, associate curator of Mori Art Museum.

The second and third sections of the exhibition look at how contemporary artists have made sense of new scientific advances, as well as more radical theories such as the potential for life outside of earth.

For example, the ArtScience Museum has commissioned a new work Slow Arc Inside A Cube VII by British artist Conrad Shawcross for this Singapore show.

The work comprises a mechanical sculpture with a hidden light source that creates moving geometric shadows in the gallery.

Says ArtScience Museum's executive director, Ms Honor Harger: "The only way we can understand what's happening within the sculpture is through the shadows it creates. It helps us meditate on the more invisible phenomena that astronomers and cosmologists are still trying to understand."

The last section takes a compelling look at "space art", with artworks which have been designed specially for space conditions.

Visitors can listen to the "moon score" by Japanese artist Nomura Hitoshi, which is a piece of music composed according to his interpretation of the craters on the moon through photos taken by Japanese astronaut Wakata Koichi.

They can also watch a video of a dance performance done in zero-gravity conditions, by French choreographer Kitsou Dubois.

Ms Harger says it is "thrilling" to be able to present masterpiece texts from the big names in Western science here.

But she adds that the loans from ACM help to show that "science wasn't a singular narrative", "but it was happening in parallel in multiple locations around the world".

She says: "They are almost like sacred texts and we have got them in dialogue with the astronomical texts from the Islamic world. This is something really unique to Singapore."

BOOK IT / THE UNIVERSE AND ART

WHERE: ArtScience Museum, 10 Bayfront Avenue WHEN: Tomorrow to July 30