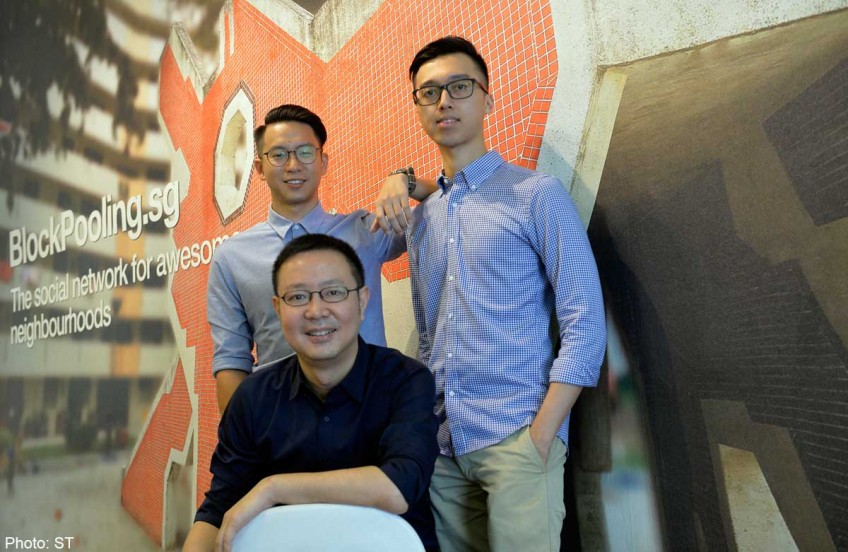 Soon after Mr Moh Hon Meng and his wife moved into their Housing Board executive flat in Simei, he found himself staring at the blocks of flats in his neighbourhood.

"I was wondering, 'What if all the neighbours knew one another? How different would our community and lives be?'" he says.

That was more than 10 years ago. In March 2013, the 46-year-old father of two started social networking website BlockPooling.sg to allow residents in different estates across Singapore to lend and borrow items for free.

Still, not enough people were using the website actively.

"Our users told us that having just a lending tool was too limiting and suggested that we offer more ways for neighbours to connect and benefit. So we decided to revamp the website," says Mr Moh, a serial entrepreneur and the chief executive of BlockPooling.sg. There are at least seven local companies - such as car rental firm iCarsClub and home-rental portal PandaBed - that allow users to rent or share personal assets, as the sharing economy here grows.

BlockPooling.sg's challenge of drawing enough active users is not unique to it.

To address the problem, Rent Tycoons, a website started in January 2013 to allow people to rent almost anything, prioritises what renters need and actively scours for the items in demand.

"We felt that this was the way to get started," says its co-founder Fenni Wang.

Mr Moh, who still lives in Simei, launched the revamped BlockPooling.sg last November. To build up traffic, he introduced several "tools for neighbours to connect".

Besides lending and borrowing things, members can sell items and offer services such as babysitting, tutoring and plumbing. They can also find out what profession their neighbours are in and approach them for contacts and references. The revamped website also offers opportunities for neighbours to socialise.

Members can use the "meet-up" feature to invite neighbours over during festive holidays such as Chinese New Year and Hari Raya.

Through this tool, Mr Moh hopes to encourage foreigners, who make up 40 per cent of the population, to get to know their Singaporean neighbours better.

Neighbours can also use the "inform tool" to let those in their block know in advance of any inconveniences they might cause, for instance, when they renovate their flat or hold big parties.

Mr Moh says he has sunk "a few hundred thousand dollars" of his savings into the venture, but expects to make money from it.

Describing the website as a "for-profit one, with a social mission", he says: "The more connected and engaged neighbours are in using our website, the more service providers would want to advertise on it."

Registration is free for all, but those who want to place advertisements have to pay.

In a bid to bump up the number of users, Mr Moh plans to merge BlockPooling.sg with another of his websites, ShareTransport.sg, a car-, bus- and taxi-pooling service with more than 22,000 users, at the end of this month. Sharing transport is another way for neighbours to connect, he explains.

He is confident that the uniqueness of his website - a "Facebook for the neighbourhood" - will draw enough advertisers for his team to make money in the long run.

He is also confident that people would want to go on his website to connect with their neighbours for "mutual benefit".

Those who register are linked immediately to their neighbours who live in the same block and same neighbourhood. The website lists 84 neighbourhoods in Singapore.

Starting this month, the website will have a new video campaign every month to promote its different tools and initiatives. It will be working with various commercial partners to give away free items.

Recruitment consultant Tay Cheong Soon, 43, who signed up to be a member in November, said he offered to lend a few things including a saw and a spanner, as well as collect his neighbours' newspapers when they are away.

So far, there are no takers, but he is optimistic that things will change when the website traffic increases.

"It would allow me to buy things in bulk with my neighbours and get a discount. We can share neighbourhood news and alert one another, for instance, if there are suspicious characters at void decks.

He is concerned about confidentiality though.

"Imagine if you accidentally post something offensive and people living in the same block can trace it to you," he notes. Mr Moh says that the onus is on each member to be responsible in his posting.

"The aim of our website is not to be anonymous, but to allow neighbours to get to know one another," he says.

This article was first published on Jan 04, 2015.
Get a copy of The Straits Times or go to straitstimes.com for more stories.