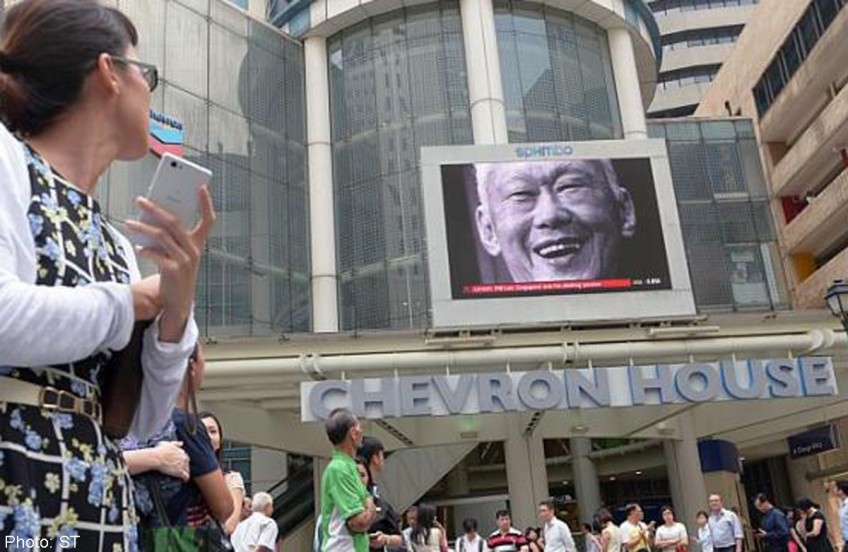 People looking up at a TV screen showing former prime minister Lee Kuan Yew on Monday, March 23, 2015. Faith groups will be holding special prayer sessions over the next few days in memory of Mr Lee Kuan Yew who died on Monday morning at the age of 91.

SINGAPORE - Faith groups will be holding special prayer sessions over the next few days in memory of Mr Lee Kuan Yew who died on Monday morning at the age of 91.

Catholic Archbishop William Goh will be holding a mass at 1.15pm at St Joseph's Church on Victoria Street to "pray for the repose of his soul and his family", said a spokesman from the Church.

The Church has also put together two special prayers for the late Mr Lee and is encouraging parishioners to offer them in his memory during masses this Sunday.

In a message to Prime Minister Lee Hsien Loong and his family, Archbishop Goh wrote that Singapore owes her nationhood to the late Mr Lee.

"Indeed, we count ourselves truly blessed to have had such a giant of a leader at a time when Singapore counted for nothing in the eyes of the world.

"It now behooves us to protect and to carry on the legacy which he has left us with - a foundation built on honesty, integrity, selfless love, filial piety, commitment and responsibility. This is the highest honour we can give to one who gave his all," he said.

The Singapore Buddhist Federation and the Kong Meng San Phor Kark See Monastery will also be dedicating a prayer service to Mr Lee at 8pm on Thursday night.

Speaking to The Straits Times, the federation's president Venerable Seck Kwang Phing said the prayer session will be in remembrance of Mr Lee, whom he described as "the father of our nation".

"We want to pay tribute to him and to appreciate what he has done for Singapore. We want to share his pioneering spirit, and our gratitude and appreciation towards him with the younger generation. We will not forget all that he has contributed," said Venerable Seck.

The Karma Kagyud Buddhist Centre of Singapore in Geylang Lorong 24A will also be holding a special worship session with "lamp offerings" to Mr Lee from 8pm to 10pm on Wednesday.

On Saturday night, worshippers at Faith Community Baptist Church also lifted up Mr Lee in prayer. Mr Lee had been warded for severe pneumonia since Feb 5 at the Singapore General Hospital.

Its senior pastor Lawrence Khong had said: "There is no Singapore without Mr Lee Kuan Yew."

The Methodist Church here also put out a statement on Mr Lee's passing. They described Mr Lee as a "guiding light" during the country's uncertain early years.

"We give thanks to God for granting Mr Lee the wisdom, integrity and gumption to steer us from a precarious past to a prosperous present and a promising future...

"Mr Lee has guided disparate communities into a multi-cultural, multi-racial and multi-religious nation where we are able to worship our God shoulder-to-shoulder with our brothers in other faiths," said the statement.

The Straits Times understands that a tribute session, to be organised by Sinda, alongside some temples and other Indian organisations, is also in the works.

Similarly, the Sultan Mosque on Muscat Street has a prayer session planned as well.

A media statement from the Islamic Religious Council of Singapore (Muis) said that the statutory body, along with the Singapore Muslim community is "deeply saddened" by Mr Lee's passing.

The statement said that among other things, Mr Lee will always be remembered for his "strong support" towards the introduction of the Mosque Building Fund Scheme in 1975 which helped the community to rally together during Singapore's period of rapid urbanisation and industrialisation.

Muis said mosque and madrasah leaders will be visiting the Parliament House where Mr Lee's body will rest from Wednesday to Saturday, and other tribute centres that have been set up across Singapore.