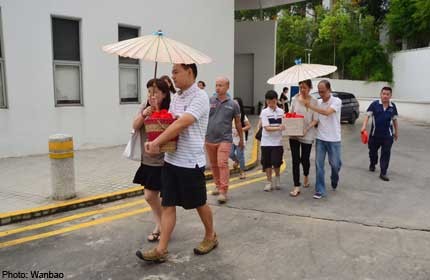 Mr Tan Chee Wee carrying the ashes of his father, Mr Tan Boon Sin, who was murdered last week. The wife of Mr Tan Chee Heong, who was also killed, carried his ashes.

Father and son Tan Boon Sin, 66, and Tan Chee Heong, 42, were killed in Kovan last week. Their bodies were cremated on Tuesday afternoon.

Their funeral held earlier at Mandai Crematorium was attended by more than 100 family members and friends.

The Tan family appeared calm on Wednesday but declined to speak to reporters.

The man accused of the murders, policeman Iskandar Rahmat, 34, was charged in court on Monday.

The accused is in custody for further investigation, and the case will be heard again on Monday.