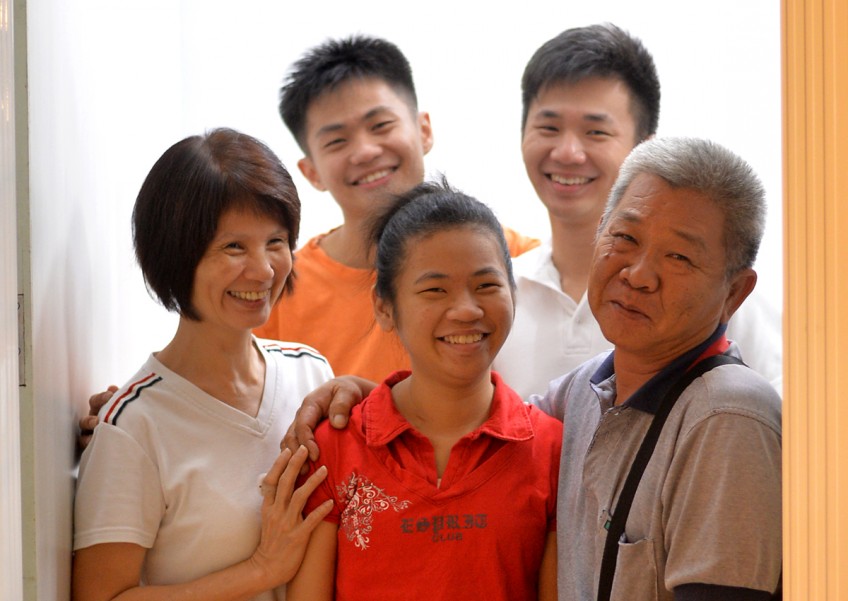 With his dad as sole breadwinner and his blind sister fighting a rare kidney disease, a man gives up his university education and works 16-hour days to help his family.

He used to come home from work so exhausted, he'd fall asleep on the living room floor.

As a baker's apprentice, Mr Tan Chin Hoe would work 16-hour days to learn the craft and trade.

It broke his mother's heart to see this because he gave up his university studies for this harsh path.

The humble young man would never say it out loud but it was because he wanted to give his family a bit of a break.

You see, he used up his savings and with some help from his family, he was putting himself through private university after obtaining a polytechnic diploma.

But the family was dependent on his father's income. The main breadwinner works as a lorry driver, earning about $2,000 a month.

Mr Tan's sister Charmaine, 20, is suffering from a rare kidney disease. She almost died from renal failure but the feisty fighter pulled through and is sitting for her A levels.

However, she didn't escape unscathed - the disease has robbed her of her sight.

The New Paper on Sunday first heard of the Tan family's story at a Chua Chu Kang GRC rally early this month.

But Kor Kor (dialect for big brother), as Mr Tan is affectionately known by his family, refuses any suggestion of heroics on his part.

He says he and his family couldn't cope, so he chose to earn some money instead of continuing with university.

"I know of friends who gave up their polytechnic studies to save their families. So I consider myself very lucky," he says in Mandarin.

Mr Tan, who turns 28 in two days' time, refers repeatedly to his mother, Madam Lee Siew Chow, 51, as the real hero in the family.

He says: "Mum did a lot for my sister, such as bringing her home from dialysis and preparing food for her - these are small things but they add up and make a difference."

Moved by her son's words, Madam Lee says: "His work is very demanding. We asked him to give it up but he refuses.

"He would come home with burn marks on his hands and clothes covered with flour and chocolate.

"It pains me to see him suffer such hardship."

When asked which hurts her more - seeing her daughter go blind or knowing her son gave up his studies to help the family - Mr Tan was quick to jump to his mum's defence.

He was otherwise rather quiet during the two-hour interview on Tuesday.

He says: "It was my own choice. I had a choice. But for my sister, it wasn't her choice.

"At times when I'm down, I'd look at my sister who is always optimistic and strong."

Madam Lee is thankful that her children are sensible and contented with what they have.

Her younger son, Mr Tan Xing Yuan, 22, is a physics undergraduate at Nanyang Technological University. He took a study loan so as not to burden the family.

Madam Lee says: "They are not materialistic or demanding. They do not ask for branded stuff."

She adds that with proper planning, the family can cope financially. But when the going gets tough, Mr Tan always takes it upon himself to take care of bills.

The family's four-room flat in Choa Chu Kang is spick and span despite the ageing furniture.

Charmaine's dialysis is subsidised, as are her medical bills. But sometimes, when she needs it, her medication can knock the budget back severely - some drugs can cost hundreds and even thousands.

So the family is frugal. They pay whenever they can via instalments and appeal only when they can't.

They don't go to restaurants, getting by with home-cooked meals every day. They do not go on holidays and wear hand-me-down clothes.

When they have a bit of extra cash, they would go out for a meal at a hawker centre, a fast-food restaurant or a vegetarian restaurant - a luxury they indulge in once or twice a year.

Mr Tan Xing Yuan is also full of praise for his older brother: "Kor Kor has dedicated his most important part of his life to this family. What else can I ask for?" But it is looking bright for Mr Tan: He has impressed his bosses at the bakery.

Mr Nick Chua, co-owner and chief artisan baker of Nick Vina Artisan Bakery, says Mr Tan has risen through the ranks to the position of chef de partie and is now in charge of an outlet.

Mr Tan now clocks shorter hours - about 12 a day - and earns almost $2,000 with overtime pay. The company is also sponsoring him for a three-year part-time diploma in baking. He is due to start the course next month.

Mr Tan shyly admits that he has a girlfriend of two years, whom he describes as down-to-earth, frugal and hardworking. They are colleagues at the bakery.

He is trying to squirrel away as much as he can from his salary so that he can pursue a degree again in a few years' time.

"I can still continue my studies if I want to. So, rather than regret what's in the past, I plan what to do next."

Blind but she's not giving up on her studies

The baby of the family is the glue that bonds the family.

Her brother says Miss Charmaine Tan, a fighter through and through, inspires him when the chips are down.

Born a healthy baby, she started losing her eyesight when she was two. She was diagnosed with retinitis pigmentosa, a retinal dystrophy in which cells that transmit light to the brain fade and die.

When she was 13, Miss Tan's kidneys failed, requiring her to go through 10 hours of peritoneal dialysis at home daily after school.

In April 2011, when she was 16, her vision deteriorated to just 5 per cent of normal vision - a sudden dip from the previous 20 per cent.

Her kidneys could not cope and her blood pressure shot up. The pressure on her optic nerves worsened her sight.

Last April, the Pioneer Junior College student was hospitalised for three months due to severe bacteria infection and she became completely blind. She can only discern very bright lights.

But Miss Tan is not giving up on her studies despite the difficulties - she had to be retained twice in JC2 because she was too ill.

For now, her goal is to complete her A levels this year.

She studies with the help of a software that reads out her softcopy notes. Her brother, Mr Tan Xing Yuan, also reads out hardcopy notes and records it for her to listen to during her revision.

Family is most important to Miss Tan - even more important that her own well-being. She turned down the chance of a kidney donation last year and chose to live with renal failure instead because she did not want to put her mum at risk.

Madam Lee Siew Chow, who is not a match for her daughter, had pledged to donate a kidney to another patient on the waiting list in exchange for Miss Tan's operation.

Miss Tan says: "In my life, what's most important are my loved ones.

"I don't want to sacrifice my mother. Her health is not good, she occasionally gets seizures."