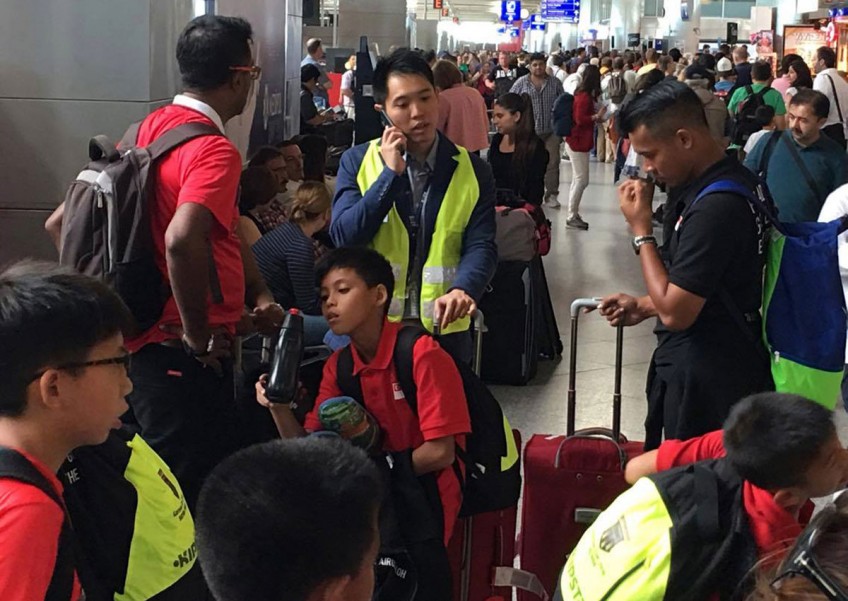 A group of Singapore boys heading to a football tournament in Sweden were caught up in the chaos following an attempted coup in Turkey last Friday.

While the 13 footballers, aged eight to 14, and the accompanying adults were never in any danger, they faced seemingly endless hours of anxiety and uncertainty.

The team, part of Fandi Ahmad's F-17 Football Academy, were scheduled to stop over at Istanbul airport en route to Gothenburg, Sweden, for the Gothia World Youth Cup.

But its Turkish Airlines flight had to be diverted to Antalya airport in the south because of the attempt to overthrow Turkish president Recep Tayyip Erdogan by a faction of the military.

The greatest concern for Mr Dan Tan, one of the six accompanying parents, was being kept in the dark about the happenings in Turkey.

He has two sons in the team: Oliver, the youngest player at eight, and Russell, 11.

Mr Tan told The New Paper over the phone from Gothenburg yesterday: "As far as I was aware, no announcements were made about the coup, at least not in English, while we were on the flight.

"Most of the passengers were not aware of the coup or diversion until we landed."

The Singapore contingent found out about the attempted coup only after they landed at Antalya, ironically from WhatsApp messages sent from Singapore by anxious family members.

Mr Tan told TNP: "The lack of information was a bit frustrating. In times of crisis, it is important to communicate.

"The first few hours, the cellular data networks were a bit jammed and it was hard to get online. There were no TVs or announcements about the coup at the airport, so everyone was relying on the Internet and social media to get updates."

Their unexpected stopover at Antalya airport became a 16½-hour wait before they could get to a hotel for some shuteye.

They reached Gothenburg at 11.50pm on Sunday (5.50am yesterday, Singapore time) - 32 hours later than scheduled. (See timeline above.)

During the delay, the accompanying parents made sure the other worried parents back in Singapore were given regular updates about their children, said Mr Tan.

He and the other five parents sent pictures and also got the children to call their parents to assure them that they were fine.

For many of the kids, it was their first time travelling on a long-haul flight. But the boys showed resilience by remaining calm, whiling away the long hours at Antalya airport kicking about and playing card games.

Mr Tan said the adults tried to explain the situation as simply as possible to the young ones.

"I'm not sure if they really understood what was going on. I don't think there was a need to scare them," he added.

"We just told them there was a flight delay and there was a serious situation in Turkey."

After finally clearing immigration, they took a bus to a hotel in Antalya, where they joined a long queue with other stranded passengers waiting for a room to rest for the night.

After barely five hours of sleep, they went back to the airport to catch a 7.35am flight to Istanbul.

Mr Nabil Yusoff, director of the F-17 Football Academy, was concerned about flying to Istanbul, the centre of the attempted coup, but they had no other choice.

Mr Tan was full of praise for Singapore Airlines (SIA) employees, who worked together with the Ministry of Foreign Affairs and the Singapore embassy in Turkey, to make transport arrangements for the team.

"SIA did a very good job in helping us get through the mess in Istanbul," he said.

Mr Tan made special mention of SIA's Istanbul station manager Lim Chuan Kai who liaised with Turkish Airlines to fast-track the team's boarding of a Turkish Airlines flight from Istanbul to Copenhagen, Denmark.

The only direct flight from Istanbul to Gothenburg that day was full.

SIA's station manager in Copenhagen arranged for a private coach to take the team from the airport to its hostel in Gothenburg.

The boys arrived at the athlete's village close to midnight on Sunday.

The Gothia Cup is the world's largest youth football tournament, featuring about 1,600 teams from around the world.

After about six hours of sleep, the boys were up yesterday morning to prepare for the opening ceremony and their opening match against Ghana at 10.30pm (Singapore time).

F-17 Football Academy team boards flight at 9.50pm. Expected arrival in Istanbul at 9.25am, Saturday, but flight is diverted to Antalya.

The plane circles airspace for about 1½ hours. Pilot informs passengers about diversion but does not give reason.

Plane lands in Antalya Airport, about 700km from Istanbul, at 9.05am.

The team is stuck there for 16½ hours, with little information on the coup or new flight timings.

At around 12.30am on Sunday, they clear immigration. Some bags are missing.

At 1.20am, they are taken to a hotel in Antalya to spend the night.

They sleep for about five hours in hotel before taking a 10am bus back to Antalya Airport.

They retrieve their missing baggage and take a flight to Istanbul at 12.50pm.

They arrive in Istanbul at 2pm and are met by Singapore Airlines ground crew, who make special arrangements for them to clear customs.

They are taken to Turkish Airlines Business Class lounge to rest while waiting for their 7.50pm flight to Copenhagen, Denmark.

After the four-hour flight, the team arrives in Copenhagen at midnight.

They were met by ground crew, who arrange for a 1am coach to take them to Gothenburg, Sweden.

They arrive at the athletes' hostel at 5.50am.

After about six hours of sleep, they get up for breakfast and training.

They play first match against Ghana at 10.30pm.

This article was first published on July 19, 2016.
Get The New Paper for more stories.