FAS to talk to senior LionsXII players for next season 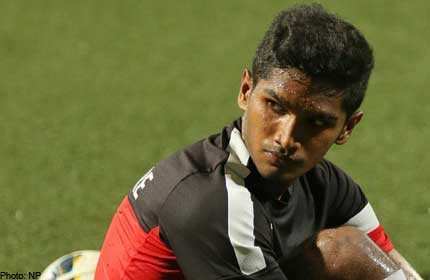 SINGAPORE - Along with his LionsXII teammates, Hariss Harun celebrated National Day in style last Friday, parading the Malaysian Super League (MSL) trophy in front of the nation at the parade at the Marina Bay Floating Platform.

The 22-year-old (above) had an extra reason to celebrate: Aug 9 marked his transition to a full-fledged professional footballer.

Hariss' full-time National Service commitment ended on Aug 9, and the Football Association of Singapore (FAS) has already spoken with a few players about impending contract talks for 2014, and beyond.

Between five and eight senior players have been earmarked to remain with the LionsXII.

While National Servicemen are on part-time deals, professional players in the LionsXII can earn as much as a five-figure monthly salary, minus bonuses.

Although individual contract talks have yet to get underway, the fact that the wheels are already in motion has brought cheer among the senior players.

"It's a good thing, and we're thankful that this move has started early. It is a move that will set players' minds at ease," Hariss told The New Paper on Monday.

The midfield star is among 10 members of V Sundramoorthy's LionsXII side currently in the 23-man Singapore squad preparing for the big clash with Oman on Wednesday in an Asian Cup Group A qualifier at the Jalan Besar Stadium.

Hariss' contract runs till the end of the Malaysia Cup tournament in November.

He is now on improved terms to match his move from a part-time player to a professional.

Recently in the news after he rejected a contract from Rio Ave, a club in Portugal's top division, Hariss has been linked with moneybags Johor Darul Takzim, the ambitious side who finished third in the MSL this season.

Besides Hariss, players like Singapore and LionsXII captain Shahril Ishak, Isa Halim, Baihakki Khaizan and Izwan Mahbud have also been targeted by the FAS.

They all welcomed the FAS move, which is in stark contrast to the situation last year, when efforts to secure players came only after the end of the LionsXII's Malaysia Cup campaign in late October.

With several S-League clubs having already decided on the roster for their respective squads by then, a number of LionsXII players had to scramble.

From an Under-28 side last year, the LionsXII class of 2013 became an Under-23 outfit strengthened by five senior players - Shahril, Fazrul Nawaz, Irwan Shah, Isa and Baihakki.

The make-up of the 2014 squad has yet to be announced, and coach Sundramoorthy's future is also uncertain.

After a triumphant MSL season, he is believed to be on the radar of some Malaysian clubs.

Speaking on the sidelines of national team training at Jalan Besar on Monday, midfield hardman Isa said: "They've (FAS) already discussed the proposed senior player quota for next year with us, and this is a move that has helped players feel secure.

"It lets us know that we've still got a fighting chance to stay in the team next year, and allows us to focus on the Malaysia Cup tournament.

"It may not seem like much, but a lot of us are very appreciative of the fact that things are moving. We are thankful to the FAS for this.

"What better way to show our appreciation than with a good performance(on Wednesday)?"

Isa, 27, is expected to start alongside Hariss in the Singapore engine room on Wednesday, in Bernd Stange's first competitive match as national team coach.

Star central defender Baihakki will take his place at the back and will be in for a busy night against a team on the cusp of becoming an Asian powerhouse. The rumour mill is abuzz with talk that Baihakki is considering a move to Johor Darul Takzim next year.

While the 29-year-old is pleased with FAS' move to touch base with players their keen to offer contracts to for next season, he simply wanted to focus on Oman.

"It's a good move, not keeping players in the dark, but as professionals, we have to be able to put other issues aside and focus on the task at hand - and in this case it's the Oman match," he said.

While there has been a move to speak with senior LionsXII players, TNP understands that talks for players still under the age of 23 next year have yet to begin.

When asked about the management's move to secure deals for players in the LionsXII squad next year, team manager Visakan Subramanian declined to reveal details.

He only said: "As far as possible, we want to prepare the strongest possible team for next season, as soon as we can."