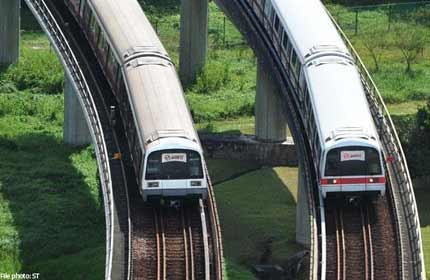 SINGAPORE - Commuters along the East-West Line found themselves late for work yesterday morning, after train services were delayed.

In a Facebook post, an SMRT spokesman said that the services were delayed for about 20 minutes from 7.05am due to a train's faulty signal. As a result, the train was unable to operate in "full automatic mode".

For safety reasons, the west-bound train's speed was reduced to 18kmh. The train resumed its normal speed of 80kmh at about 7.30am.

SMRT said on Facebook that normal service was resumed at 8.10am when trains were reinstated to normal speeds.

The SMRT spokesman added that crowds at affected stations were cleared by 8.25am.

Commuters on SMRT's official Facebook page reported overcrowding at platforms in various stations, such as Bedok and Jurong East.

Netizens also described their frustrations of having to wait as trains were too packed to board.

Public-relations executive Alvin Foong, 27, was on his way to Joo Koon from Buona Vista MRT station to attend a course yesterday.

Upon arriving at Buona Vista Station at 7.15am, he was greeted by the sight of a large crowd.

When he boarded a train 10 minutes later, it was a crowded one. Mr Foong ended up late for the course.

He said: "I was fortunate that I managed to squeeze into the first train. At subsequent stations, many commuters couldn't get on board."