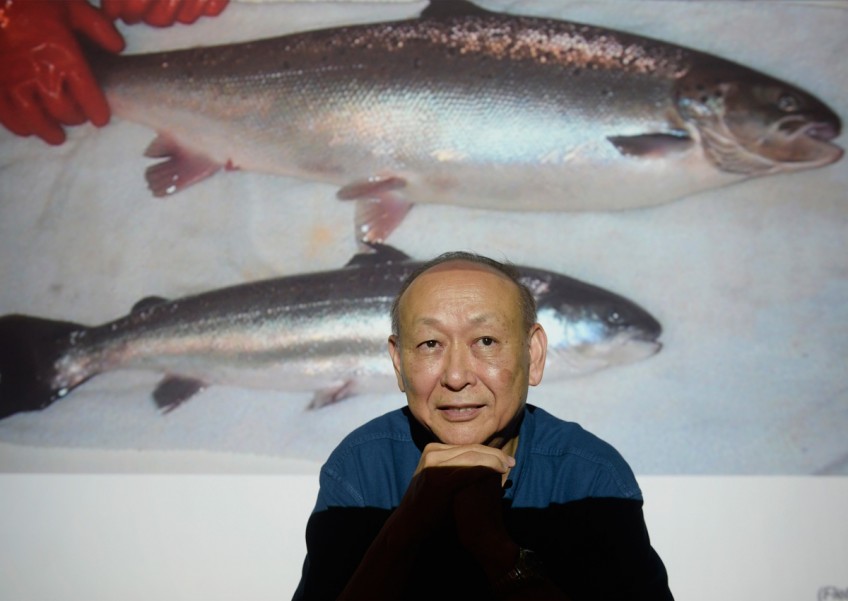 After 20 years of deliberation dogged by controversy, the United States Food and Drug Administration (FDA) has given the green light for the world's first genetically engineered animal to reach dinner plates.

The genetically modified (GM) salmon was created in 1992 by Emeritus Professor Hew Choy Leong from the department of biological sciences at the National University of Singapore.

While he will not get royalties for his creation, the 73-year-old is happy the years of hard work are finally getting somewhere.

"The patent expired five years ago and I don't get any money," said Prof Hew with a laugh. "But to me, intellectually, I am happy that we get recognised for the work."

Yesterday, the FDA approved the fish manufactured by AquaBounty Technologies, a company based in Massachusetts, US, as safe for consumption. The company, where Prof Hew was chief scientist before he left in 1999, first applied to the US agency for approval in 1995.

The fast-growing Atlantic salmon can grow to a marketable size in about half the time compared to an ordinary salmon. So instead of taking three years to reach the market weight of 4kg to 5kg, the transgenic salmon requires 18 months.

The FDA website said its scientists had rigorously evaluated extensive data submitted by AquaBounty Technologies, and other peer-reviewed data.

They found the GM salmon was safe to eat, safe for the fish and met the claim that it grew faster. The inserted genes also remained stable over several generations of fish, added the watchdog agency.

Modified to carry a growth hormone gene from the Pacific chinook salmon and DNA from the eel-like ocean pout, the salmon can grow faster as the hormone is kept active all the time. The transgenic fish is sterile and would not be able to breed with populations in the wild.

But while the FDA has given its approval, Prof Hew admits it would be another story to get consumers on board. Already, the FDA's decision has led to a backlash with some grocers in the US reportedly saying they would not sell the GM salmon.

Washington-based non-governmental organisation Food and Water Watch told Reuters it is considering a lawsuit to block such salmon from reaching the market.

Proponents of GM foods say the technology could hold the answer to meeting the world's food needs and reduce the pressure on dwindling fish populations.

"Individual GM foods and their safety should be assessed on a case-by-case basis and it is not possible to make general statements on the safety of all GM foods," said Prof Schlundt, who was formerly the director of the Department of Food Safety and Zoonoses at the World Health Organisation.

The Agri-Food and Veterinary Authority (AVA) told The Straits Times GM food crops and animals sold in Singapore have to undergo safety assessments by both the AVA and the Singapore Genetic Modification Advisory Committee. The developer of the GM salmon would have to apply for a safety assessment before it can be sold here, said the spokesman.

It may take about two more years for the fast-growing salmon to reach consumers' plates.

Prof Hew, who has sampled it, said there is "no difference" in taste from ordinary salmon. "It tastes exactly the same because you feed it with the same thing," he said.

Quick to grow, safe to eat

This makes the fast-growing Atlantic Salmon the frst GM animal to hit dinner plates. ST looks at some facts about the salmon.

- Instead of taking about three years to reach the market weight of between 4kg and 5kg like ordinary Atlantic salmon, the GM salmon requires just 18 months.

- It is modified to carry a growth hormone gene from the Pacific chinook salmon and the DNA from the eel-like ocean pout. This helps to keep the hormone active all the time.

-The salmon is made sterile so that it cannot interbreed with other fish in the wild.