A fine balancing act for the media 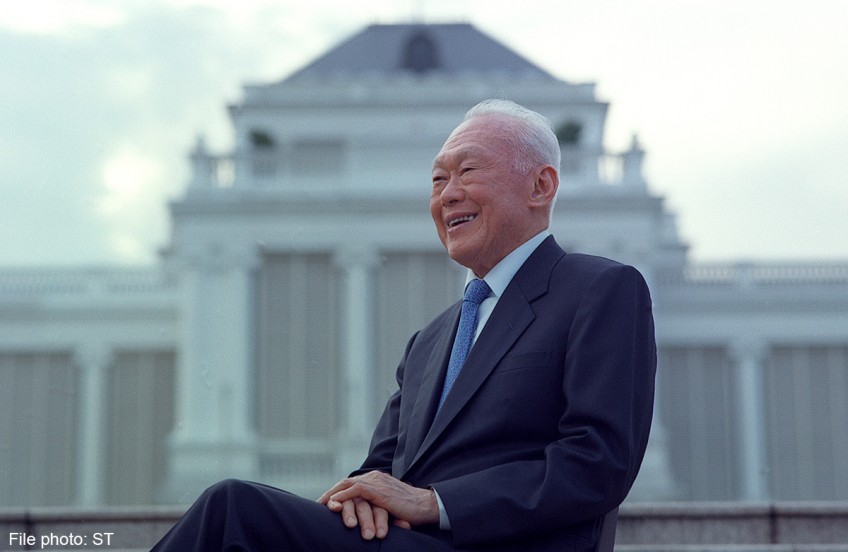 File photo of the late Mr Lee Kuan Yew in front of the Istana.

One November evening in 1999, Lee Kuan Yew telephoned: He was troubled by a new information phenomenon which was threatening to overwhelm the traditional media industry.

In America, the markets were rapidly coming to the conclusion that there was no future in print newspapers, whose eyeballs were migrating to cyberspace.

How would this information revolution impact the Singapore media? He was anxious to find a response that would enable the mainstream media to keep its eyeballs. He wanted us at Singapore Press Holdings to think about the way forward.

For him, the media was one of three institutions in Singapore he told an aide he needed to control in order to govern effectively. The other two were the Treasury and the armed forces.

His relations with the media had been rocky at the start of his political career. While in opposition, not everyone in the press had sympathy for his political goals. The Malaysian Malay media, which could circulate in Singapore then, was hostile.

My first editor-in-chief, Leslie Hoffman, had a furious row with him over freedom of the press that blazed across the front pages of The Straits Times, and went all the way to the International Press Institute (IPI) annual assembly in 1959 in Berlin, where Mr Hoffman appealed for IPI support.

Once in office, Mr Lee set out to change the rules of the game:

They wanted command of the national narrative.

What did he want of the press in Singapore? He put it best in 1971 when he went to another IPI conference following another bitter confrontation with the Singapore media: "The mass media can help to present Singapore's problems simply and clearly and then explain how if they support certain programmes and policies, these problems can be solved.

"More important, we want the mass media to reinforce, not undermine, the cultural values and social attitudes being inculcated in our schools and universities...the freedom of the press must be subordinated to the integrity of Singapore, and the primacy of purpose of an elected government."

He wanted the press to help him if it thought his policies deserved support. The operative word was if. He did not want blind support. A sycophant, obsequious press would be worthless to him, he would tell us on more than one occasion. It would have no credibility.

In truth, most of his policies made sense. The list is long: Robust multinational corporation-led growth wiped out double-digit unemployment, widespread in the early years following independence.

Affordable public housing was easily available, made possible by large-scale land acquisition at below-market rates and use of the Central Provident Fund. An overhaul of the education system reduced once unacceptably high dropout rates in schools so everyone could realise his or her full potential.

Tough laws were introduced to ensure safety in the streets. Good housekeeping by never living beyond our means meant a debt-free state, crucial for a sound economy.

These and many more. That might well be, but the pitfalls for us were many, even though he and our editors shared broadly similar goals: We both wanted what was best for a young nation and we believed in a credible press at the same time.

For example, land acquisition unsettled many thousands of people who refused initially to resettle and had to be forcibly moved. How to report this massive exercise without reflecting the angst as well?

Or, in the case of education, we could not avoid reporting the very adverse reactions to streaming and bilingualism. But, in the process, we opened ourselves up to strong suspicions that we were undermining those initiatives.

Or spending policies. How much should people be taxed, for incomes, car ownership, employing maids, goods and services tax? And how much financial support to give to the poor and sandwiched class?

Moreover, not every policy was reasonable. For instance, The Straits Times could not embrace his controversial attempt to get more graduate women to marry and have children. We felt, like most of the people, that it was too divisive to further advantage graduate women by giving them generous perks.

Mr Lee did not believe a Western-style media was in Singapore's best interest. He wanted a media like the BBC whose objectivity he valued.

He was impressed with the Japanese press. He had read about them from books by Western scholars, and believed that its agenda was driven by what would best serve Japanese interests.

We went to Japan to find out more. But they are a different society, in so many different ways; culturally, geographically, historically. They operated press clubs in every ministry, and journalists at the clubs work at the ministry every day in a largely symbiotic relationship. It would not be workable here.

How did he translate into practice his vision of the kind of journalism he wanted?

Put simply, in the early years, he used the hard line, with what he called knuckle-dusters to press his point of view, whenever he was dissatisfied with the way we covered the challenges Singapore faced.

He believed that Singaporeans had deeply embedded Asian values they should not dilute without serious consequences. Hence, he went all out to protect the strength of the family unit.

So, coverage of lifestyles that could weaken the family was a constant bone of contention. It proved tricky for the newsroom, so exposed were we to Western cultural influences and fads.

We could not ignore trends like pre-marital sex, but to him, it was a serious threat to the family unit. He disapproved of promiscuous conduct, and would react strongly whenever we ran a piece that appeared to promote such behaviour.

He did not press his strongly held beliefs just once, but kept it up all through his years in office.

He always reminded us how the world worked. He would send us articles he had read, or share with editors his experiences over the occasional lunch or dinner. They were mostly about developments elsewhere that had an impact on Singapore.

He was always looking over the horizon, studying what trends would affect us and what new strategies were needed to either take advantage of them or minimise their adverse effects.

His goal was to educate his people, and one way was through the mass media. The purpose was simple: Unless Singaporeans understood the realities of having to live off a small, resource-poor, tropical island one degree north of the equator in an ever-changing world, they would not understand, and hopefully support, his tough policies.

Over time, one reality he had to accept was this: As Singapore developed, he had to abandon his knuckle-duster ways; they were ill-suited to a more educated electorate wanting more political space. Closing down newspapers and detaining journalists, actions that traumatised us in our newsrooms in the early 1970s, were no longer options.

In his closing years as prime minister, he took a more sophisticated, persuasive approach, stepping up his contact with the media - editors and younger, promising reporters alike - to explain the issues in person, to convince and cajole.

On our part, we continued to press the need for more space and diversity of opinion in our pages, or lose credibility. We had to respond to the changing needs of the public who wanted OB markers for national discourse moved.

It was always a fine balancing act, how to professionally serve our readers without appearing to undermine policy. Regular run-ins with the Government were thus par for the course.