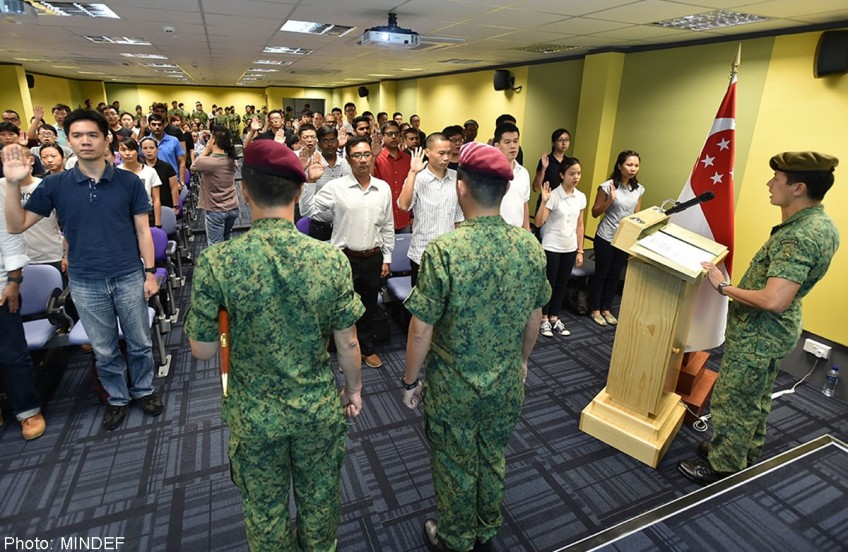 SINGAPORE - The first of three intakes of volunteers for the Singapore Armed Forces Volunteer Corps (SAFVC) have been enlisted.

The inaugural intake of SAFVC Volunteers (SVs) comprises of 68 Singaporeans and Permanent Residents who were enlisted at Maju Camp on Tuesday, Mar 24.

The SVs pledged their commitment and loyalty to the SAF by taking an oath of allegiance, with their family members and loved ones as witnesses.

Among them is Member of Parliament for Pasir Ris-Punggol GRC, Dr Janil Puthucheary, who became a Singapore citizen at the age of 35, reported Channel NewsAsia.

Speaking to the SVs in his opening address, Commander SAFVC Colonel (COL) Mike Tan commended them for stepping forward to play their part in national defence and highlighted that this was an important commitment. COL Tan said, "By stepping forward to volunteer, you are making a commitment to serve alongside our servicemen and servicewomen to ensure the continued peace and security of Singapore. You have made the all-important decision to give your time and commitment, out of your own volition, to serve the nation and the people who live here."

The SVs will undergo two weeks of Basic Continuous Training from Mar 24 Mar to Apr 2.

During the course, SVs will be equipped with basic military skills and knowledge, such as SAR 21 technical handling and live firing, standard obstacle course familiarisation, foot drills and will go through a two-day field camp.

They will also be introduced to general military knowledge and culture.

They will subsequently undergo one week of Qualification Training and if required, one week of Advanced Training to prepare them for their specific roles.

The SAFVC is a uniformed volunteer scheme that allows more Singaporeans and Permanent Residents to contribute to national defence, support National Service, and deepen their understanding and ownership of national defence.

SVs will be deployed alongside regulars and national servicemen.