Flats for singles: Has HDB's stand on marriage changed? 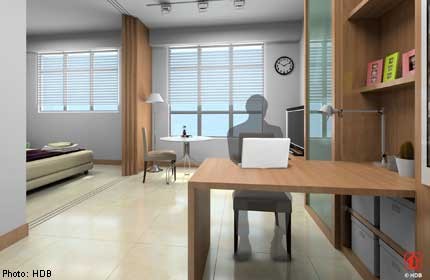 SINGAPORE - HDB's recent launch of new two-room flats in Sengkang and Yishun has met with overwhelming demand, contrary to some industry expectations that it would be lukewarm.

In some ways, the figures should not surprise us. The recent policy move by the Housing Board (HDB) to allow singles to buy new flats for the first time is a significant one that has been a long time coming, and has unleashed pent-up demand from singles over decades for such flats.

It is the latest in a series of moves over the decades to liberalise the public housing market - a process that began in 1990 with the introduction of the Joint Singles Scheme (JSS), which allowed two to four singles to pool together and purchase a resale flat.

Eventually, over the years, singles were allowed to buy resale flats - first restricted to three-room flats or smaller, in non-central areas, then by 2004, resale flats of any size in any location with the help of grants with income ceilings.

But one perk remained elusive to this group this whole time - the benefit of buying flats directly from HDB.

The singles group had repeatedly over the decades called on the government to recognise their individual contributions to society by allowing them to do so, but the government's stance has always been that Singapore's housing policy is centred on marriage and parenthood.

Therefore, Singapore's public housing programme gives the biggest benefits to married couples and policies such as the qualifying age of 35 for singles to get benefits are geared towards nudging singles to get married.

So if this is that case, the question is: why now, after all these years of resisting the call to allow singles to buy new HDB flats? Does this mean the government's stance on marriage has changed? In my view, this would be a simplistic reading.

If you look at history, there already were signs that the government would eventually relax this policy.

Back in 2004, then National Development Minister Mah Bow Tan said on record it was "conceivable" that singles will be allowed to buy new flats directly from HDB in the future.

And in last year's National Day Rally, Prime Minister Lee Hsien Loong hinted at it finally becoming reality when he noted that singles were concerned that buying a home has become increasingly unaffordable with resale flat prices rising.

"It is something on the minds of many Singaporeans, because the singles numbers have gone up… I am confident nearly every Singaporean household can afford their own home. We have done it before and we can do it again," he said.

National Development Minister Khaw Boon Wan has even said that the HDB would not necessarily stop here, and more flats may be made directly available to singles in the future.

You could argue it was a matter of time before this policy was introduced, as it is a logical next step for HDB on its long-term process of liberalising the housing market.

This does not mean, however, that the policy linking housing and marriage has changed.

The bulk of benefits, like I mentioned earlier, are still reserved for married couples. The new scheme to allow singles to buy new two-room flats also comes with many caveats - there is an income ceiling, the flat size is small, and they are in non-central locations.

HDB has also been careful to introduce the scheme at a time when the needs of married couples have already or are being met by a housing supply boom. Only 30 per cent of the two-room flats are available for singles. And the qualifying age remains at 35.

In 2004, Mr Mah had said: "It's still important for us to encourage marriage and parenthood. If we lower it (the qualifying age), it would be sending quite a different signal on the Government's policy."

In fact, you could argue that helping unmarried adults own a home might help them establish relationships and lubricate their social lives. Singles often cite living with their parents as a key obstacle to meeting potential spouses, as they do not have the personal space to invite friends home for social gatherings.

Our pro-family housing policies prior to the announcement of this scheme has not improved the country's flagging birth rates and declining marriage rates. This new scheme will not worsen it - in fact, given a chance, it might surprise us by having a positive effect.

The policy change can also be seen as part of the Government's larger narrative to build a more inclusive society - a vision of the current Cabinet - where the state is more willing to play a role to help those less represented in society.

HDB, for example, has in recent years started addressing the needs of specific segments of the population such as the elderly, second-timers, and the low-income with targeted measures.

The new policy now narrows the gap between singles and couples, and signals that the government is responding to the needs of a growing bloc of citizens who also desire to own their home. But it is clear that married couples are still the priority.

As for concerns that land-scarce Singapore will not have enough space for singles to own their own home, PM Lee has expressed confidence that there is enough space to accommodate an expanding population through developing more housing estates and reclaiming more land in the long run.

Seen in this light, HDB's latest move should be embraced as a step in the right direction towards addressing the needs of an increasingly diverse population and a more inclusive society.