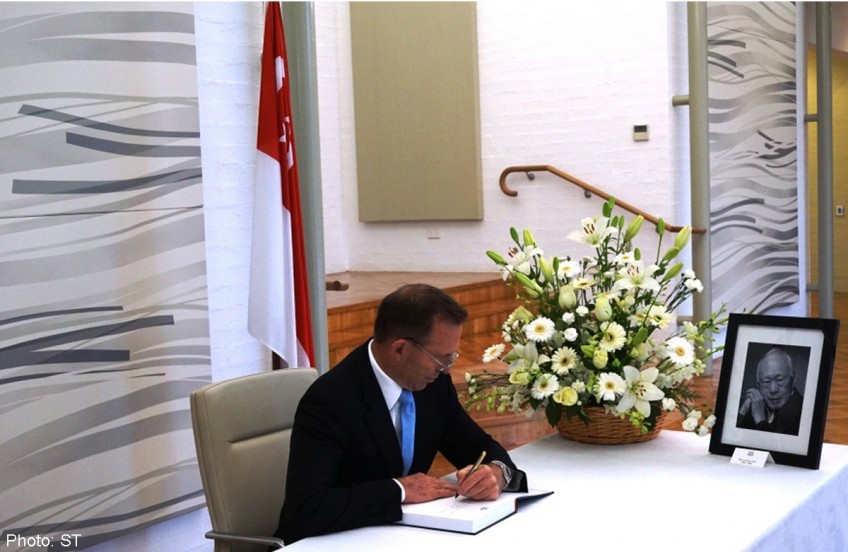 Prime Minister of Australia Tony Abbott signing the condolence book at the Singapore High Commission in Canberra on Tuesday, 24 March 2015.

A PHALANX of foreign leaders will descend on Singapore over the weekend for the funeral of Mr Lee Kuan Yew, a challenge in protocol and logistics as the island hosts some of the world's most protected leaders.

As flags of diplomatic missions in Singapore fluttered at half-mast in respect for Mr Lee, the foreign ministry in Beijing said a Chinese leader would attend Sunday's funeral service in Singapore for Mr Lee, without giving names.

The Japanese leader is trying to juggle his legislative agenda to travel to Singapore on Sunday, government officials said.

Many of them will be here for just the day, departing promptly after the public ceremony at the University Cultural Centre. That will require a high measure of coordination and logistics in security terms, traffic control as well as aircraft departure times.

The US flags at the embassy in Napier Road and at Sembawang Wharves were at half-mast, as were all three Australian flags at the residence of Canberra's envoy to Singapore Philip Green.

The Australian and New Zealand parliaments were among those which passed condolence motions for Mr Lee.

Describing Australia and Singapore as "natural partners", Mr Abbott said he hoped that over time, the relationship between his country and Singapore would be "as easy, close and as familial as it has long been with New Zealand".

In Beijing, Executive Vice-Premier Zhang Gaoli was the most senior Chinese leader to record his condolences in the book opened at the Singapore Embassy.

"The Chinese people will always remember the outstanding contributions he made in fostering friendly China-Singapore ties and co-operation. I solemnly express my heartfelt condolences at the passing of Mr Lee," he wrote.

A condolence book will also be opened in the US Congress today.

Also honouring Mr Lee was his alma mater, Cambridge University's Fitzwilliam College, which lowered its flag to half-mast on Monday.

An obituary notice on the college website described Mr Lee as "the most significant statesman to be a member of Fitzwilliam College". Mr Lee graduated at the very top of his cohort, above two contemporaries who became professors of law at Cambridge, said the college, which currently has 28 Singaporean students on its rolls.

Yesterday, Mr Lee was on the cover of South Korea's biggest newspaper, Chosun Ilbo, with the story focusing on his Oxley Road home, a "humble house" that is testament to Mr Lee's integrity and determination to build a corruption-free nation.

Mr Lee's passing, nearly a quarter-century after he stepped down from leadership, continued to make news around the region.