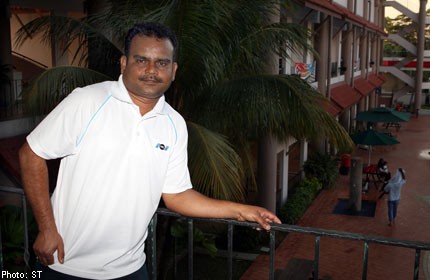 SINGAPORE - Four times a month, construction worker Radha Krishnan and several of his colleagues take turns to walk around their dormitory in Sembawang at night.

But this is no leisurely stroll.

Instead, they are keeping a lookout for unauthorised individuals and sharing tips on crime prevention with other workers in the dormitory.

Mr Krishnan is among 64 workers who have been appointed foreign worker ambassadors - part of Project Foreign Workers Awareness and Readiness (Forward), which was launched by the police in collaboration with some dormitory operators last year.

Ambassadors then share what they learn with fellow workers.

"The training is good. We have 70 per cent less theft cases in our dorm compared to 2010," said Mr Krishnan, 34, who hails from India.

Project Forward was among 22 initiatives organised by grassroots groups, schools and private-sector associations that were commended at Thursday's National Community Safety and Security Programme award ceremony.

Speaking at the event, Senior Minister of State for Home Affairs Masagos Zulkifli said: "By encouraging foreign workers to be vigilant and observant... they too contribute to the safety and security of the dormitory and inevitably of our own neighbourhoods."