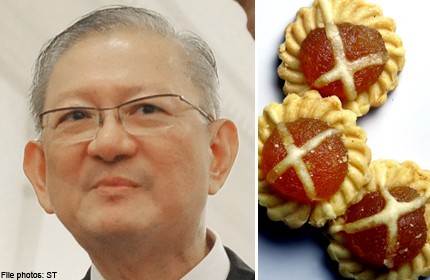 Lim Cheng Hoe was charged on Thursday with 60 counts of cheating by submitting false claims to the MFA amounting to $88,997.

SINGAPORE - Court papers revealed that among the claims were reimbursements to Lim for 10,075 boxes of pineapple tarts and 248 bottles of wine over a four-year period from 2008 to last year. But of these, only 2,116 boxes of the popular confectionary and 89 bottles of wine were actually purchased and given away by the MFA.

SINGAPORE - As chief of protocol at the Ministry of Foreign Affairs (MFA), Mr Lim Cheng Hoe was the go-to guy for advice on how to do things the right way.

Described by some as a "legend" for his knowledge of diplomatic protocol, he headed the ministry's section responsible for organising ministerial and presidential trips overseas.

In June, he was accused of making improper expense claims.

Officers from the Commercial Affairs Department (CAD) stepped in to investigate and the career civil servant was interdicted, a move that included docking his pay.

The ministry said at the time that the alleged claims were purportedly for reimbursement of expenses which Mr Lim had incurred during some of his trips abroad.