SINGAPORE - Ferrari's Sebastian Vettel and Kimi Raikkonen escaped punishment over a first-corner crash at the Singapore Grand Prix which took out four cars on Sunday.

Race stewards said nobody was wholly to blame for the accident, which happened when Red Bull's Max Verstappen was caught between Vettel and Raikkonen at the start.

All three cars were forced out immediately and the crash also ended the race of McLaren's Fernando Alonso, who was heavily shunted and had to retire a few laps later.

"The stewards found that no driver was wholly or predominantly responsible and therefore we take no further action," officials said after an investigation.

Verstappen had complained that he was caught in a "sandwich", while Ferrari caused controversy for a tweet which appeared to blame the Dutch teenager for the crash.

"How on earth you can work that out (blame Verstappen) from watching that, I have no idea," Red Bull team principal Christian Horner told Sky Sports.

"What Seb probably couldn't see was Kimi on the other side of Max. He's been aggressive with Max and Kimi's done the same thing from the other side and the end result is what you see there," he added.

"Anyone who can blame Verstappen out of that needs their eyes tested."

Four more cars crashed out or retired in what was the first Singapore Grand Prix night race to take place in wet conditions.

Mercedes driver Lewis Hamilton, who profited from the Ferrari accident to go from fifth to first place, won the race to take a 28-point lead in the drivers' world championship. 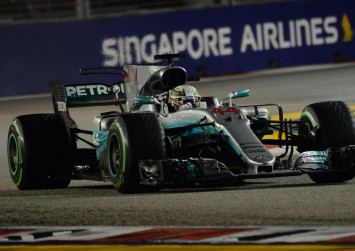 Read Also
Formula One: Both Ferraris crash out in wet Singapore 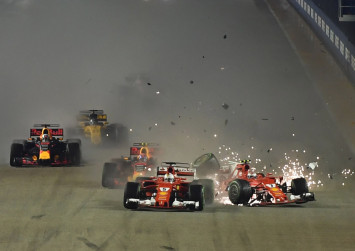