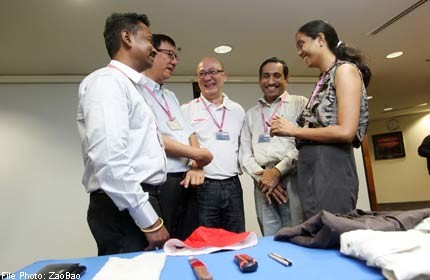 From left: Veluchamy Seshakumar, Kong Ngai Kiong, Kong Chun Yuen and Somasunthram Niranjan, were commended by the Acting Commander of Central Police Division for their selflessness.

SINGAPORE - It looked like a lovers' tiff at first. But when a pair of former police officers in their 50s saw the man grab something belonging to the woman and run off on Wednesday, they knew they had to do something.

The two men, who are unrelated but are from the same clan association, alighted from the bus they were on and gave chase.

They were joined by 39-year-old Veluchamy Seshakumar, a manager at Giant hypermart who was also on the bus.

When the younger Mr Kong caught up with the man along St Michael's Road, the suspect lunged at him with a knife, causing him to fall in front of a car.

Businessman Somasunthram Niranjan, 48, who was driving his daughter home from school, managed to stop the car in time and quickly got out to help.

The older Mr Kong and Mr Seshakumar were able to pin the suspect to the ground and force him to release the knife. Mr Niranjan called the police, who came within five minutes and arrested the 52-year-old suspect.

Said the older Mr Kong: "It all happened so fast. But it was a terrible five minutes, he was struggling very hard."

On Thursday, the four men were commended for their selflessness by the Acting Commander of Central Police Division, Superintendent of Police Tan Kuan-Wei.

Mrs Anusha Moorthy, 30, the victim, said: "I'm really thankful for their presence of mind and their readiness to help people."

The information technology analyst had been waiting for a taxi on Serangoon Road after lunch and was holding her wallet and mobile phone in her hand.

A man in a red cap approached her, looking as if he wanted to ask something. But he pulled out a knife and pointed it at her stomach, motioning for her to hand over her wallet, which contained credit cards and $100 in cash.

She did not scream as she was afraid it would make him angry.

As the suspect tugged at her wallet and phone, Mrs Moorthy fell. He then snatched the wallet and ran.

After the press conference at Central Police Division, Mrs Moorthy invited the four men for a meal. "If they like Indian food, I'll cook for them," she said.