Four-year-old injured in leg and forehead during murder bid 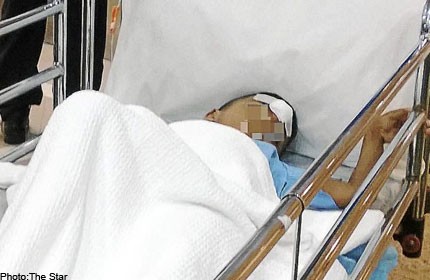 GEORGE TOWN, Malaysia - A four-year-old boy is lucky to be alive after he was shot in the leg and a ricocheting bullet grazed him on the forehead.

B. Shawn Yashwin underwent a three-and-a-half-hour surgery to remove a bullet from his left leg and is now conscious and in stable condition.

The boy was with his car repossessor father E. Beritto, 33, in a Bukit Jambul apartment compound when the shooting occurred at 10.45pm on Thursday.

Beritto was talking to a friend when two men on a motorcycle stopped near them and one of the men then repeatedly opened fire on him but all the shots missed.

A relative, Catherine Benedict, 50, said Shawn went into the operating theatre at about 1am and regained consciousness at about 8am.

"He asked for his parents when he opened his eyes. We thank God for protecting him and keeping him safe. He was grazed on the forehead by a ricocheting bullet," she said at a private hospital.

He said the gunman, who was clad in a black jacket and gloves, fired from a distance of between five and 10m.

"Beritto, who lives in Bayan Baru, has no criminal record. We have classified the case as attempted murder under Section 307 of the Penal Code. We also found 10 bullet casings at the scene," he added.