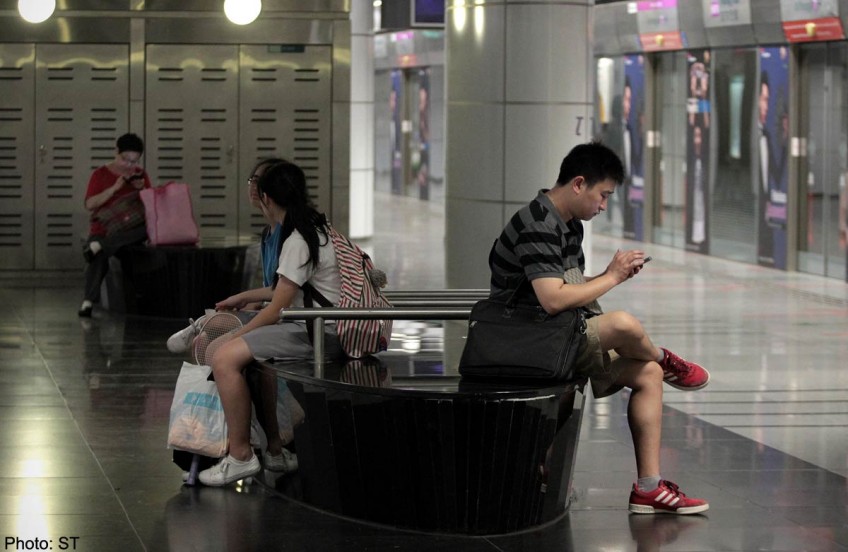 With this, 32 stations across the entire MRT system will offer free Wi-Fi, the Land Transport Authority (LTA) said yesterday in a report. All such stations are located on these three lines.

After a spate of breakdowns, including major ones in December 2011, the LTA began extensive renewal works for the NSL and EWL in 2012.

These included replacing timber sleepers with concrete ones. The replacement process requires trains to run slower while the new sleepers are stabilised.

Replacement work on the NSL is about 76 per cent complete and due to finish by the middle of next year. Trains are back to full speed from Yio Chu Kang to Khatib.

Quality assurance engineer Lu Huimin, 26, travels between Toa Payoh and Woodlands on weekdays. She looks forward to faster train rides after the works are done.

"It's a chore to have to spend so long sitting or standing in a train on the way home," she said.

The signalling system is being upgraded to let trains run more frequently. Works are 73 per cent complete for the NSL and will start early next year for the EWL.

Work will start next year to replace the power-supplying third rails of the NSL and EWL and is due to finish by the end of 2016. Defective or sagging third rails have caused several train disruptions over the years.

On the NEL, wires and U-bolts are being replaced. These are part of the overhead system which supplies power to trains, and have caused breakdowns in the past when they corroded and snapped.

Meanwhile, construction on the Downtown Line's second stage is close to 90 per cent complete, with its 12 stations on schedule to open by the first quarter of 2016. The 16 stations in the final stage are on track to open by 2017.

Work has started on the northern stretch of the Thomson-East Coast Line, with tenders for civil works to be called early next year for its eastern stretch. It will be completed in stages from 2019 to 2024.

The LTA has also called a tender for Canberra station on the NSL between Sembawang and Yishun. Work will start in the second quarter of next year and finish in 2019.

Existing lines are getting greater capacity, with a 48 per cent increase in the train fleet under way. The first of 18 new NEL and 24 new Circle Line trains will enter service from the middle of next year. From 2016 to 2019, the NSL and EWL will get 57 new trains.

The LRT lines are also getting a boost, with 13 more train-cars for the Bukit Panjang LRT system and 16 more to arrive for the Sengkang- Punggol LRT from 2016.

This article was first published on Dec 19, 2014.
Get a copy of The Straits Times or go to straitstimes.com for more stories.