Getting attached to a toilet 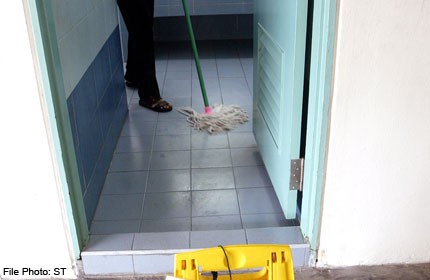 The first two days of a new school year sends shivers down her spine, but not for reasons you might imagine.

The mess created by Primary 1 pupils in the toilets can be a nightmare for cleaners like Sandy.

"They do things like taking a lot of toilet paper at a time, not flushing and washing their hands without drying them, leaving the whole toilet wet," says the 65-year-old, who works in a primary school in the west.

She asks that we do not reveal her real name as she did not get permission to speak to the press and fears that being identified could mean losing her job. And she really needs it, she says.

On Wednesday, the Government announced that local cleaners will earn at least $1,000 per month from September, up from $850 now.

This comes on the back of a pay hike 2,500 local cleaners in PAP-run town councils received from November last year, raising their starting pay from an average of $1,000 to $1,200.

Sandy, who earns $1,000 a month, says she is happy about the new wage adjustment although it does not directly benefit her.

She is content with her salary, but she still has to scrimp and save. This is even though both her sons, who are in their 20s, have jobs.

Money in the family is a little tight, she says. She often takes a five- to 10-minute walk home from the school to have her lunch, in a bid to limit expenses.

Sitting at a food court near her neighbourhood, she laments in Mandarin: "Things are so expensive nowadays. Having a meal here costs at least $4."

Before she had children, Sandy worked in a factory. She was a housewife for a few years before taking on the job of a cleaner 15 to 18 years ago.

She says the stench was something she had to get used to.

"These days, I'm used to it," says the seasoned hand, who puts in eight to nine hours a day, five days a week.

Getting to know the pupils over the school term also makes her job easier.

"I will say, 'boy ah, remember to flush, and don't make the whole place wet when you wash your hands at the tap', and they will say, 'okay, auntie'," she says with a chuckle.

It is clear that she takes pride in her work.

"I make a decent living and put food on the table. When I see people enter a toilet I have cleaned up, I feel like I have really done my job. There's a sense of satisfaction because I'm earning my keep," she says.

She develops a sentimental attachment to some of the toilets she cleans and feels sad when she has to leave for another place of work. "I once cleaned a toilet which was originally very dirty. I did it so regularly that it was spick and span. When it was time to move on, I shed some tears. I felt like it was my toilet," she says with a laugh.

Still, Sandy, who completed her secondary school education, is not immune to the social mores surrounding this blue-collar occupation.

"I don't like to be out in public spaces in my cleaner's uniform. I bring an extra set of clothes to change into, especially if my workplace is far away from my home. It just isn't very nice that people know I'm a cleaner," she says with a smile and shrug.

The job is physically demanding.

"I start with sweeping the corridors, then the toilet, before moving to work on the toilet bowls, wash area and walls. I also have to make sure that my assigned portion of the stairs is clean," she says.

"You could even say that the school toilets are cleaner than the one in my own home because I'm too exhausted to clean when I get back.

"In the past, I used to be able to do the toilet at home two to three times a day, but these days, I can only manage once a week," she adds.

At work, a three-cubicle toilet takes her about 30 minutes to clean.

She is drenched in sweat by the time her work day is over.

"When I first started working, my body ached all over. These days, only my knee caps hurt and my hands get numb sometimes. It's just part of getting old," she says.

Despite the job taking a gradual toll on her body, retirement is the last thing on her mind, especially since money in her Central Provident Fund was used for one of her son's university education.

Job security is her top concern.

"The school's contract with my cleaning company is almost up, so I keep wondering if I will still get to work there, and whether they will still want to hire people like me," she says.