The 'Godfather' with no parents 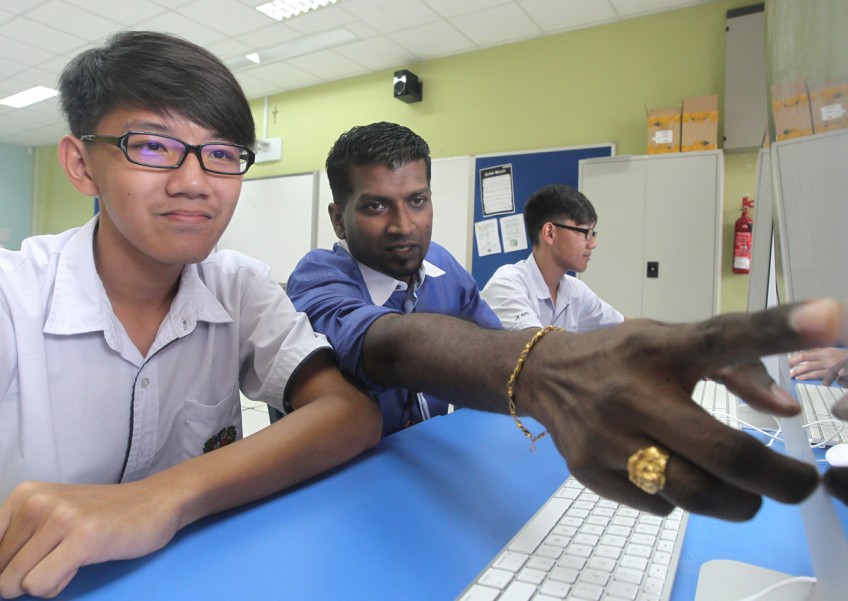 Abandoned as a newborn baby, abused by his adopted mother and raised in an orphanage.

Mr Manimaran Shyam Luke Samiayya, 40, has every reason to feel bitter or sorry for himself.

But there is no hint of hate or self-loathing.

He agrees to talk about the time with his abusive adopted mother but does so with little emotion. Instead, he prefers to focus on what he has achieved.

And how far has he come? Despite the mammoth challenges, he slogged his way through polytechnic, then scored a scholarship to study overseas and is now a teacher.

He is well-placed to inspire students with difficulties, he says.

At Assumption Pathway School (APS) where he teaches, Mr Luke goes by the nickname "The Godfather".

He tells The New Paper on Sunday: "I'm strict with my students. But they know that I'm strict because I care for them and I want them to do well."

He can look and sound stern, which sends his students scrambling when they realise they have pushed their luck too far. No surprise - he was a military man before becoming a teacher.

"When it comes to lesson time, I make sure they know it's time to be serious and the kids know not to step on my head or there will be consequences," says Mr Luke, an information and communications technology teacher.

It was a student who first gave him the nickname.

He says: "He calls me 'The Godfather' because he didn't have the typical disciplinarian or fatherly figure at home and I think I may have been it for him."

Mr Luke adds that the student - whom he declines to name so as not to embarrass him - had a history of fighting with other students at his previous school.

"He had anger management issues but somehow I managed to get through to him.

"I met him on the first day of school at APS. It took me a while to get through to him once I learnt his character but when I did, he became attached to me," Mr Luke adds.

The student is now six months away from graduation.

He says: "When I am able to help students like him, it really makes me happy. It is the reason why I came into teaching in the first place."

Mr Luke graduated from the National Institute of Education in 2007 and was posted to Bendemeer Secondary School before moving to APS in 2010.

He went into teaching so he could "give back to the younger generation".

To help them through their challenges, he has been open about his personal life.

In May this year, when he told his students to prepare cards for Father's Day, Mr Luke revealed for the first time that he has no parents of his own.

His students immediately peppered him with questions.

"They asked me all sorts of things. Why did your parents throw you away? What was life like in an orphanage? Did the orphanage give you money every day to eat at school?

"I told them very honestly what life was like."

But one point he makes repeatedly: If he can make it, they can too.

And his wife shares the credit.

"I always believe that behind every successful man is a very supportive woman. My wife has been the one who continuously kept me motivated and gave me the morale to keep at what I'm doing," he says.

Mrs Luke, who works as a help desk manager, tells TNPS: "I always remind my husband that he writes his own future and not anyone else, certainly not his past."

That painful past is now used to motivate others.

Mr Luke says: "This is more than a job to me. It is a promise that I made to myself and to them. It is my mission to push as many of my students past the finishing line.

"I will be living proof that they can achieve whatever they want to."

He wants to inspire his students

After completing his diploma in architectural technology at Singapore Polytechnic - which was covered by a bursary from the institution - Mr Luke was supposed to start National Service.

He saw an opportunity to score a full-time job with the Republic of Singapore Air Force (RSAF) and took it.

While serving, he applied for a scholarship to study Computer Science at Coventry University in the United Kingdom for three years.

"When my application was approved, I could not believe it at all. I was going to university. The feeling was unreal," he says.

After graduation, he served in the RSAF for six years before switching to the National Institute of Education (NIE) because he really wanted to become a teacher.

He also wants his story to inspire others.

"After I finished my stint at NIE in 2007, I was already raring to get into it.

"It is important to me that I pass it on to the kids of today. From the place that I came, I still managed to make something of myself.

"And all I want is for my students at Assumption Pathway School to know that they, too, can make something of themselves no matter what the situation is for them now."

Mr Luke was abandoned when he was only two weeks old and never learned of his parents' identity.

A cleaner found him at the void deck of a HDB block in Toa Payoh and he was sent to the now defunct Grace Home in Changi.

A couple adopted him when he was three. Unfortunately, the adoption didn't turn out to be his happy ending.

His adoptive mother abused him.

His adoptive father was rarely home - he worked a day and night job, both as drivers.

Mr Luke was their only child.

He says: "When I was in Primary 1, I remember my mother would tell me that 'dog poop' would be waiting for me if I wasn't home by 1.20pm."

School ended every day at 1pm and to get to his home at Owen Road, he had to walk about 4km. If he didn't make it home within 20 minutes, his mother would punish him.

"She would take the paper on which the dog had defecated and shove it in my face, specifically on my mouth," he adds.

He was given only 20 cents for school every day, which was not enough for a plate of food.

So he resorted to staying behind in the canteen after recess and eating scraps left on the tables.

He says: "Once, I was so hungry so I borrowed money from a classmate to have a meal but when my mother found out, she became furious.

"That day when I got home from school, she tied me to the window and caned me numerous times on my buttocks.

The final straw came when he got his Primary 1 year-end exam results. Mr Luke was placed fifth in his class.

But it wasn't good enough for his mother - she wanted him to be in the top three.

"When I showed her my report card, she stripped me naked and told me to get out of the house," he says.

"I remember just crying and crying in the corridor."

A neighbour, who had seen Mr Luke abused on numerous occasions, called the police after she saw him in the corridor. The police took him back to the orphanage.

"I never wanted to be adopted again," he says.

He stayed at the orphanage until he was 19 and graduated from the polytechnic. After that, he did his national service.

It was only recently that Mr Luke found out his adoptive parents had died.

Despite the abuse, Mr Luke still carries the name they gave him. Shyam Luke was given by the orphanage but the rest of his name was given by his adoptive parents.

He says: "I respect them until today. They were my first so-called parents and I still respect that so I'll carry their name."