Good credentials, but disappointing in Parliament 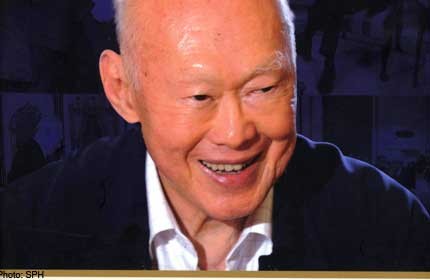 SINGAPORE - He has "not turned out to be so brilliant".

This line can be found in his latest 400-page book One Man's View Of The World.

In the chapter on Singapore, Mr Lee reflected that "at least two factors worked significantly to the PAP's detriment" in the 2011 General Elections. The fact that the WP was able to produce a star candidate, former top lawyer Chen, was mentioned as one of the reasons.

Mr Lee, however, said in his book that Mr Chen disappointed in Parliament despite having stellar credentials.

He added that while Mr Chen had well-written prepared speeches, he is "all over the place" when it comes to follow-up questions.

In an e-mail reply to The New Paper, Mr Chen said he hasn't read the book, adding that it is "after all, but one man's view".

"The growth of parliamentary opposition is unprecedented in our recent history. What we have done, first and foremost, is to grow from two WP MPs in the last Parliament to nine in this Parliament. We have worked hard to ground our parliamentary participation in the reality that is Singaporeans' everyday lives and hopes.

"(Mr Lee) is entitled to his views but we remain steadfast in our commitment to doing our part for a First World Parliament. Singapore deserves no less - the diversity of many Singaporeans' Views of the World (sic)."

Mr Chen, 52, who is an MP in Aljunied GRC, joined the party in 2007. He returned to the country for good, months before contesting in the 2011 elections. Last based in Beijing, he was the managing partner of New York law firm Davis Polk & Wardwell.

The Taiwan-born Singaporean, who left the country in 1982, graduated from elite universities such as Oxford, Harvard and Stanford.

Political analyst Eugene Tan said voters are not too fixated with Mr Chen's performance in Parliament.

"Currently, voters are more focused on their constituency work, rather than their parliamentary work.

"They (voters) also recognise that there are only seven elected opposition (members) in Parliament and they constitute a valuable, if not limited impact," said the Associate Professor of Law at Singapore Management University.

In his book, Mr Lee highlighted his party's new candidates, five of whom are now in the Cabinet.

In particular, he singled out Education Minister Heng Swee Keat, whom he described as "the best Principal Private Secretary I ever had".

"The only pity is that he is not of a big bulk, which makes a difference in a mass rally. But he has one of the finest minds among the civil servants I have worked with."

"The emphasis for WP MPs is constituency work and they have been pouring their heart and soul on town council matters. In Parliament, WP have been focused on the issues of AIM and hawker centre cleaning and have crossed swords with the PAP on these matters."

Prof Tan added that several WP members, Mr Chen included, have quit their jobs to focus on their work as MP.

A political commentator who declined to be named, does not think that Mr Chen has underperformed in his role as an MP. (Mano Sabnani)

"Mr Chen is new to politics and the party and WP will pick the right person to speak, depending on the issue. Mr Chen is the party's intellectual, and he would usually comment on the broad issues, like the economy for instance," he said.

"(Mr Lee) has a way of drawing people out into the battlefield," he added.

Prof Tan thinks that Mr Chen was inevitably singled out in the book because he was the star candidate of WP.

"He had the credentials expected of a front bench MP...Mr Chen is perceived to add heft and deptH to the WP."

One Man's View Of The World is available at all leading bookstores for $39.90 (inclusive of GST).