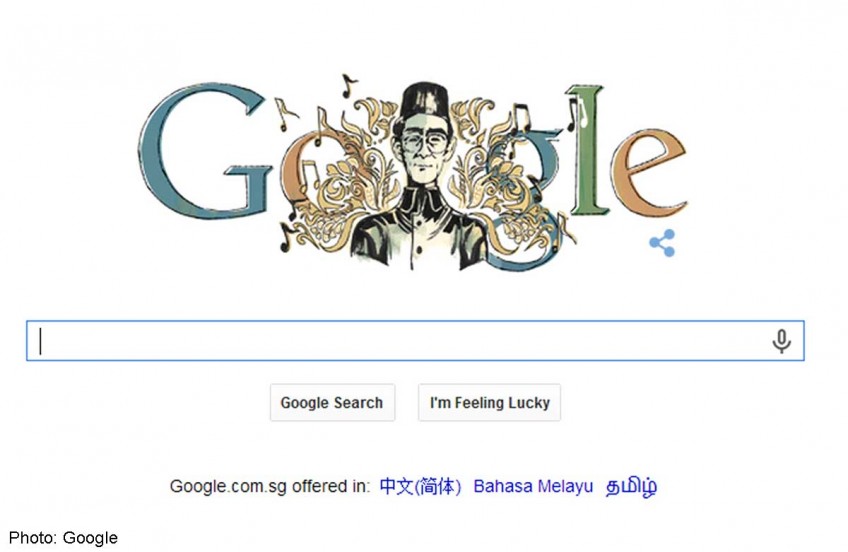 A doodle of late Singaporean composer Zubir Said appeared on the Google Singapore homepage yesterday to coincide with what would have been his 107th birthday. Google wanted to honour the self-taught musician with “a heart of gold”.

A doodle of his likeness, drawn by a team of illustrators, appeared above the search box yesterday to coincide with what would have been his 107th birthday. Clicking on the image, online for a day, led to article links about him.

This was the first time an individual Singaporean was featured in the local (.sg) domain. Users of other country-specific domains such as .au for Australia were not able to view the image.

Google has featured Singapore-themed doodles before, but those centred on events like National Day. A spokesman said it wanted to honour the self-taught musician with "a heart of gold".

Besides his musical contributions, "he was also remembered in Singapore for... helping adopted families and friends as much as he could even though his own family wasn't very well-to-do", the spokesman added. "We wanted to celebrate this beloved man's spirit and legacy on Google Singapore's homepage today."

Google Doodles, the first of which appeared in 1998, reinvent Google's logo in tune with global and local events. The feature is meant to liven up the homepage and gain traction with users.

The musician's youngest daughter, Dr Rohana Zubir, 75, said: "I remember him as a very nationalistic, loving man with a great sense of humour. This is a wonderful way to jog the memory of someone who played an important role in Singapore's history." Younger Singaporeans like student Jeremy Tee, 15, found the doodle novel. He said: "I admit that I didn't really know much about him... until today. I'm glad I found out more."

Mr Zubir was born on July 22, 1907, in central Sumatra. At 21, he left for Singapore, honed his music skills with a bangsawan (a type of Malay opera) troupe, and later worked as a recording supervisor and band conductor.

He was asked to compose a song by then Singapore Mayor Ong Eng Guan for the re-opening of Victoria Theatre in 1958.

The song, Majulah Singapura, was formally adopted as the official National Anthem when Singapore achieved self-governance in 1959.