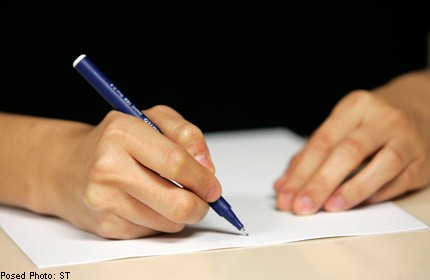 SINGAPORE - Help wanted: Government agency wants to communicate simply with sincerity and empathy with the public, but does not know how.

That, in a nutshell, is what the Public Service Division (PSD) and other agencies are saying in recent tenders seeking writing consultants and trainers to bridge the communication gap.

The PSD wants to simplify 260 letters and other correspondence that 26 agencies send out all the time, and present information better with graphics.

The Education Ministry hopes to train 800 school administration managers and vice-principals to write replies, so they no longer sound like they are giving instructions but offering friendly advice.

They are also to write from the "customer's perspective" and explain policies with "sensitivity and empathy", the tender said.

Similarly, the National Environment Agency is training its officers to "avoid standard and tired words and phrases, that will project little feeling or sincerity".

The Ministry of National Development, Internal Revenue Authority of Singapore and Housing Board have also sought such help.

Their efforts dovetail with recent reminders from political leaders to public officers to show empathy and sincerity in the course of their work. Just last week, Prime Minister Lee Hsien Loong called on the officers to strengthen trust between citizens and the Government, by seeing things from the people's viewpoint and being in touch with the ground.

For a long time, bureaucracies here and abroad have been criticised for using jargon. Back in the 1970s, the late Cabinet minister Goh Keng Swee required officers to write clearly and gave them copies of The Complete Plain Words by Sir Ernest Gowers, written for the British civil service.

By 1990, the Government here also recognised it had to change its tone towards citizens in its drive towards excellence in the public service.

A 2005 poll of official letters to The Straits Times Forum page found that they sounded less bureaucratic and dismissive than in 1990. The latest push for better writing, however, points to further room for improvement.

The British government continues to face this issue too. It was reported in July that it had banned more than 30 terms of jargon common in government announcements and policy documents, such as "facilitate", "drive" (unless it is cattle) and "deliver". A new style guide for bureaucrats there said only things like pizzas and post can be delivered, not "improvements" or "priorities".

The PSD told The Straits Times that its latest move is part of the Government's continuing efforts to "improve service delivery" to the public. It is also planning writing workshops and writing guides for public officers.

Mr Tay Choon Hong, director of PSD's Public Service for the 21st Century (PS21) office, said: "These efforts reflect our ongoing commitment to be people-centric and service-orientated, to communicate in a manner that citizens and our customers can understand and relate to."

Associate Professor Lee Chun Wah of the Wee Kim Wee School of Communication and Information said the Government needs to improve its tone of communication to build trust with the public.

The Nanyang Technological University don said: "If the public is able to sense that the Government is humble, it will be able to recover that reservoir of trust."