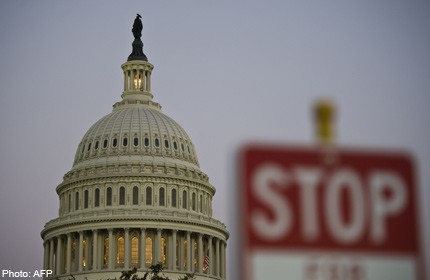 A stop sign is seen at dusk next to the US Congress building on the eve of a possible government shutdown.

Mr Edwin Ho, 27, who is studying for a master's degree in film studies at Columbia University in New York, told The Straits Times that he has been unable to apply for a social security number due to the shutdown.

"Because of this, I cannot start my job as a multimedia associate on campus," he said.

Mr Ho added that the university did not seem to have any protocols to assist affected students.

Ms Christina Ng, 24, who does business development at a Silicon Valley start-up, is facing visa woes. She had applied to convert her H1B1 work visa to H1B. Both are visas for professionals, but the latter allows for longer stays.

Singapore travellers, too, have been taking the disruptions in their stride.

Due to the shutdown, key US attractions such as Yosemite National Park in California, the Statue of Liberty in New York and the Lincoln Memorial in Washington, DC have been closed.

Exchange student Woo Yan Yan, 21, said she has had to postpone weekend trips to Washington, DC and New York. "I'll seek solace in the clam chowder here in Boston," she quipped.

Travel agencies in Singapore are monitoring the situation. While there have been no cancellations yet, CTC Travel said 16 free-and-easy travellers due to depart next week have requested to postpone their trips.

"We're liaising with our suppliers, such as airlines and hotels, to see how we can work things out," said its spokesman Alicia Seah.

At SA Tours, a tour group will depart as scheduled tomorrow.

Said spokesman Eva Wu: "They have to make do with walking around (the closed monuments in Washington) instead.

"But our customers have been understanding and are aware that the whole shutdown was unforeseen."

However, Singaporeans say any disruption to daily life has been minimal, as key services are still functioning.

"People are talking about it a lot, but actually everyday lives have not been much worse since the shutdown," said Mr Jonathan Lim, 26, a lawyer at the World Bank in Washington, DC.

He added: "At the practical level, not much seems to have changed. The buses are running, shops are still open, police are still on the streets."