SINGAPORE - JTC Corporation has cordoned off an area near Seletar Aerospace Heights after a Grab delivery rider collided with an unmarked kerb and broke two bones in his right arm.

The incident occurred around 4.30am on Tuesday morning, when 29-year-old Muhammad Iskandar Shah was riding his e-scooter home after finishing his deliveries.

While making a right turn and crossing the road at a pedestrian crossing along Seletar Aerospace Heights, however, he failed to notice a kerb and crashed into it.

Mr Iskandar told The Straits Times that the kerb was the same colour as the pavement, making it difficult to spot even though the front light on his e-scooter was turned on. 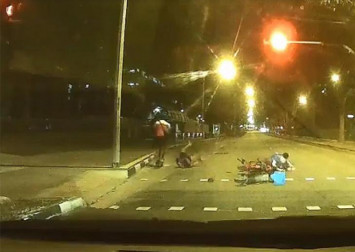 Although he said he was travelling within speed limits at the time of the accident, the impact of the crash flung him off his e-scooter headfirst.

He stuck out his arm to try and break his fall, but ended up landing hard on it instead.

When he tried to pick himself up, he felt an intense pain in his right arm. He also noticed an odd lump along the side of his arm.

This was in fact his bone pressing against the skin of his arm, which he would later learn he had broken.

Mr Iskandar managed to contact his cousin, Mr Indra Khai Rezan, who rushed down to the scene and took Mr Iskandar to Khoo Teck Puat Hospital.

Mr Iskandar was subsequently given 36 days of medical leave.

Though he worked for Grab on an ad-hoc basis, the accident has left him worried about the future as the job was his sole source of income. He lives with and is responsible for supporting his parents, who are in their 60s and unemployed.

He added that he has qualifications in the logistics sector, but as the industry requires him to do heavy lifting, employers would likely not hire someone who had previously broken their arm.

Mr Indra, 37, later uploaded photos of Mr Iskandar's injuries, as well as of the accident spot, on Facebook.

"What if instead of (Mr Iskandar), someone else knocked into the kerb - for example, a handicapped person? The kerb should be painted black and white," he said, adding that he had contacted the Land Transport Authority (LTA) about it.

ST understands, however, that area where the accident took place is managed by JTC Corporation and not LTA.

JTC and the National Parks Board said in a joint statement that the accident site is part of the area where works for the Round Island Route are taking place, and they are investigating the matter together.

Both organisations said they are sorry to hear of the incident.

A Grab spokesman told ST that the company is in touch with Mr Iskandar and is supporting him with his insurance claims.