Graduates quit their jobs to become hawkers like their parents 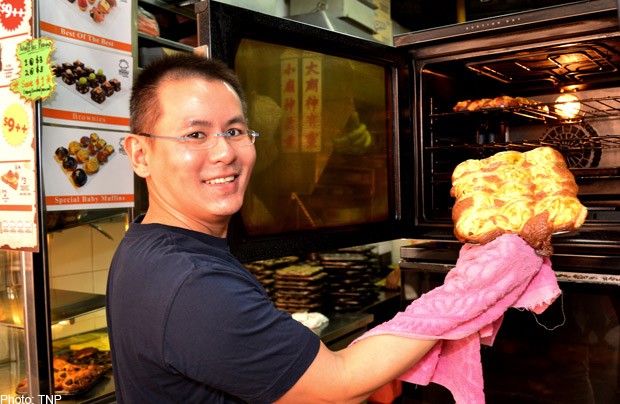 Graduates quit their well-paying office jobs to become hawkers out of their passion for food.

"And I hope to build a business around selling something that I love." He opened his stall - Ah Geok Prawn Noodle - along Toa Payoh North in August.

Mr Low has a degree in mechanical engineering from the National University of Singapore.

Previously, he was an operation executive in an investment bank for two years, and a sales representative with a Japanese trading company for three years. He says: "After a while, I grew tired of the corporate world. My first job was monotonous and didn't provide many opportunities for growth.

"My second job required me to travel frequently - at least a quarter of the year.

I couldn't do that with a kid on the way."

Mr Low is married to a 30-year-old executive in a drilling company. They live in a four-room flat in Tiong Bahru and are expecting their first child in March next year.

"I wanted more flexibility at work," he says. "I've also wanted to be my own boss for years. "The fact that I can decide how much I want to sell each day attracts me.

In April this year, he invested about $10,000 setting up his stall. "My father once ran a stall for a year in the 2000s. He passed me his recipe, and I've been trying to improve on it since."

But when the idea was first mooted, his wife wasn't very keen. Said Mrs Lydia Low: "I was afraid we wouldn't be able to make enough to maintain our current lifestyle.

"I also wondered why he wanted to rough it out when he could work in an air-conditioned office. But since it's his passion, I support him wholeheartedly."

For now, Mr Low sells what he likes. On a good day, he sells up to 70 bowls. He buys ingredients from dealers and wet markets, and also shells prawns, boils soup and fries the pork, lard and shallots for his dishes. In the afternoon, he washes the used bowls.

The work takes him about 11 hours a day, mostly while standing. His work attire is a T-shirt and shorts because of the heat. Mr Low also suffers burns and blisters every week from touching hot surfaces accidentally.

He says: "It's part and parcel of the job. It's more tiring than an office job, but I have my own freedom." His dream?

To one day expand his business, open a restaurant or cafe. "I enjoy food, and want to share it with others. Even though it's hard, it sure beats being in an office."

From engineer to muffin seller

His father had left him a zi char stall. But Mr Anton Tan (left), 42, transformed it into a muffin shop. Says the former engineer, who used to earn about $3,000 a month: "My father made very good and popular zi char dishes.

"But it is hard to expand from a business perspective. I wanted to find a product that I could duplicate easily."

He tried numerous products, like Japanese pastries, sushi and dumplings. Eventually, he decided on selling muffins. "They are sweet, delicious and fragrant. "They also let me exercise my creativity, since they can come in many different flavours."

Mr Tan has an engineering degree from the University of Manchester Institute of Science and Technology in the UK.

He was retrenched from his semi-conductor firm in 2004, after working there for five years.

At the time, his father owned a stall at Lorong 1, Toa Payoh. But the old man was dying from cancer and handed the stall over to his son.

Says the younger Mr Tan: "I initially thought of giving up the stall and returning to the 'stable' world of engineering.

But my mother and I want to keep it alive, out of respect for my father. "Even after I decided that selling zi char was not for me, my mother asked me to keep the shop's signboard. "She has never asked me for anything before."

So that's what he did. In August 2005, the bachelor packed up the wok and focused on whipping up just muffins.

Like fortune cookies, some muffins also come with a fortune slip with either meaningful quotes, lucky numbers or a puzzle. When he first started, he sold only about 10 muffins a day. Now he sells a few hundred. He says: "Initially, business was so bad, I started to appreciate even what one dollar can buy me.

"My shop doesn't have a long history of making muffins, but I'm willing to work hard to please my customers."

Her parents were against it. But Joanne Ng and Daniel Lee, both 31, wanted to be part of Ms Ng's family business.

Her father has been selling fishball noodles for more than 10 years and owns the Ru Ji Kitchen stall in Holland Drive.

The couple now run a second branch at Old Airport Road. The family has also opened a third branch in Redhill in May.

She says: "There's a lot of potential in this business. Many people still love hawker food.

"It would have been a shame to let my father's skills go to waste. He does everything by hand - the fishballs, fishcake, even the chilli and lard." Both have degrees in biomedical science from the University of Bradford in Britain through a private university, where they studied together.

After graduating, they worked in biomedical sales, and then as tutors. They also started a business selling clothes. Sadly, these ventures didn't work out or could not be expanded further. That's why they decided to join the family business.

Two years ago, they started helping out at her father's stall. In those days, they felt embarrassed whenever their friends came by. Says Ms Ng: "We were sweaty and grubby. It felt so unglamorous." But they soon got over it. In May last year, they invested $10,000 of their savings to start the second branch.

They recouped the amount in two months. Says Ms Ng: "We were lucky. Many people like my father's recipe and are happy there is an outlet in the eastern side of Singapore." These days, business is brisk. Queues are long and their homemade fishballs and fishcake sometimes sell out before noon.

In the last few months, they've also hired three workers to help them. "Because the response is encouraging, we hope to expand even more in the future."

On average, they work about 10 hours a day. Says Mr Lee: "We go out less on weekends because that's when there's most business.

"But it's worth it when you see the customers' satisfied faces."